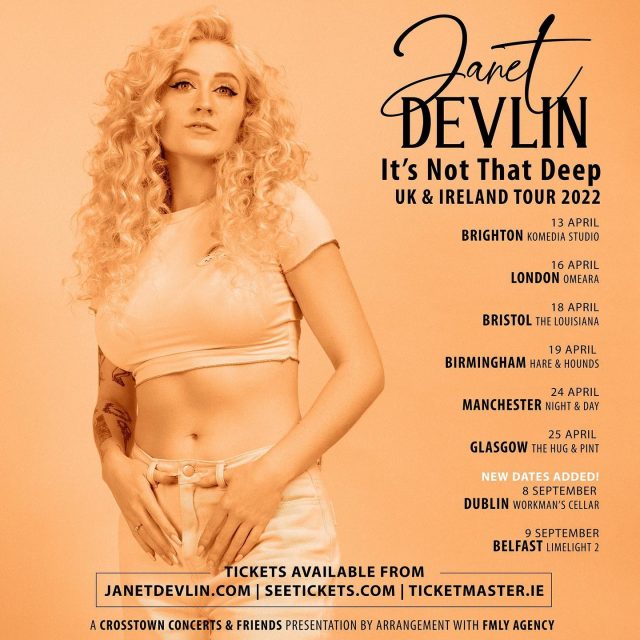 Starting tomorrow, Northern-Irish singer-songwriter Janet Devlin is hitting the road on her ‘It’s Not That Deep UK & Ireland Tour‘. The tour will be supporting her recently released EP of the same name, It’s Not That Deep along with Devlin teasing some unreleased songs off her upcoming album she’s working on.

“With this tour the thing I’m most excited about is that I’m playing songs from an unreleased album. I’ve never done that before… The stuff I’m performing is some of the new songs I’ve been working on for the currently unreleased album, which is a country record, so I’ve got five new country songs in the set-list.” – Janet Devlin via Daily Star

Tour kicks-off on April 13th in Brighton, with five additional dates in April followed by two dates in September including her return to Ireland with a show in Dublin. Full list of dates with ticket links below or available at janetdevlin.com/tickets.

After pouring her heart out on 2020’s concept album, Confessional, Janet Devlin released It’s Not That Deep in December of 2021, describing the EP as a “welcome break” to the deepness she previously explored. “I was explaining my ideas and I just kept saying “it’s not that deep” so naturally that became the name, and quite honestly the phrase has made its way into my daily life now!”

It’s Not That Deep features new originals “Place Called Home” and “Otherside” which give an insight into her current mindset of reflection and optimism. The new EP also features a nostalgic rendition of her X-Factor debut with “Your Song” (Elton John), along with a unique take on Ed Sheeran‘s “Bad Habits”and Prince’s “Kiss”.