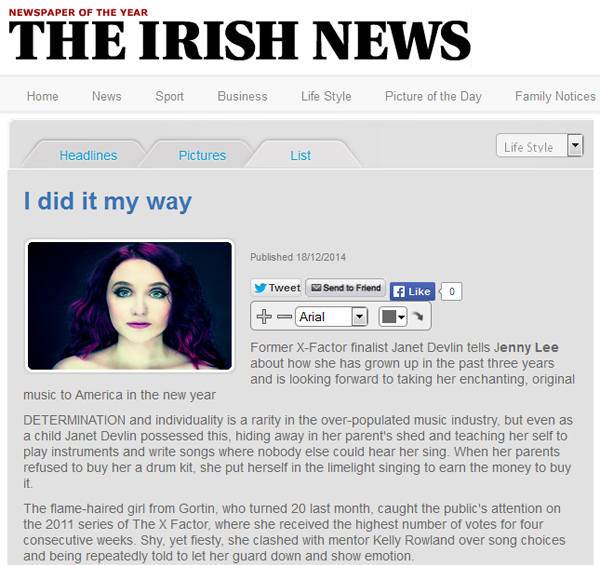 Janet Devlin recently sat down for an interview with The Irish News to talk about her 2015 plans, including the upcoming North American release of her album, Running With Scissors on OK!Good Records. Her debut album will be available February 10th, 2015 with live performances and appearances in the US to be announced early 2015.

Janet first caught the public’s eye from her performance on The X Factor in 2011, receiving the highest number of votes for four consecutive weeks.

Even after her shock early after nerves got the better of her and she she appeared to forget her words, she was offered a record deal by RKA Records. Despite the temptation of fame, she refused to be cajoled down the commercial pop route, tuning it down to pursue her dream of writing her own music. “It was nice money but I didn’t want to be in the music industry for the sake of it – I wanted to earn my place,” she says.

Originally released in the UK, Janet’s debut album hit number one in the UK Indie Breakers chart and 43 in the UK pop charts in June 2014. With the upcoming North American release of Running With Scissors Janet is ready for big things as she brings her unique song-writing and enchanting vocals across the pond.

“I’m so excited. I’m going to be living in New York and hopefully it will go well because I already have a big fan base in the States from the Youtube channel,” she says.