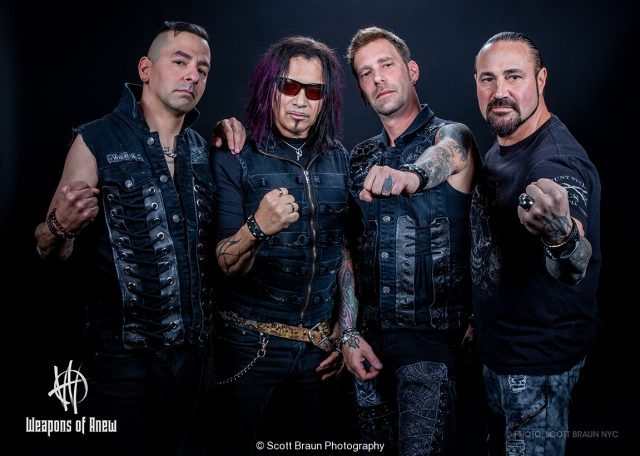 Francisco Zamudio of KNAC.com interviews Weapons of Anew about touring, their 2019 Tour EP, and their upcoming album

Weapons of Anew have been praised numerous times by fans and critics alike for their high energy live performances, and Freddy told Zamudio that their 2019 Tour EP was meant to capture that energy for their fans. The EP was recorded during their summer tour with Scott Stapp, who both Freddy and Reno called, “one of the nicest people ever”. Freddy went on to say that Weapons of Anew is “really a live band”, and that he feels like their upcoming album has captured the essence of their live show.

Watch the full interview with Francisco Zamudio of KNAC below:

Weapons of Anew are released their 2019 Tour EP on Decmeber 13th via OK!Good Records. Recorded live on July 30th, 2019 from the Palace Theatre in Greensburg, PA during their tour with Scott Stapp, the five-track release features songs from their debut album, A Collision of Love and Hate including their unforgettable single, “Killshot”, “This Moment”, “Speed”, and “Sundown”, as well as an acoustic rendition of “This Moment”.

Mixed by famed rock producer and recording engineer Mike Ferretti (Sevendust, Breaking Benjamin, Warren Haynes), Weapons of Anew’s 2019 Tour EP is “a special ‘thank you’ to those who have attended [their] shows and supported [them] from the very beginning” according to guitarist, Freddy Ordine. “[It is] the perfect preview of what to expect from Weapons of Anew in concert”.