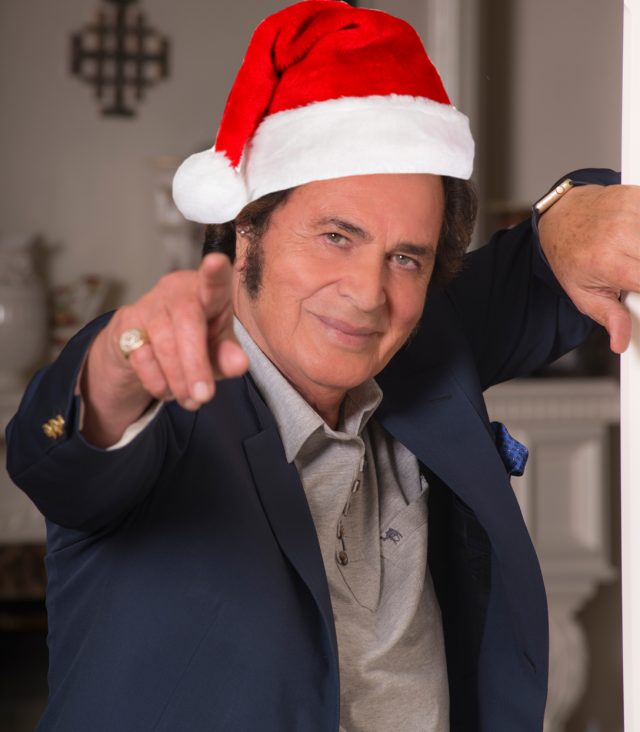 We hoped you enjoyed reading Engelbert Humperdinck’s commentary during the 12 Days of Humperdinck. The Man I Want To Be is the culmination of more than 50 years of Engelbert’s career. The amount of endearing and dedicated fans is without doubt one of the main reasons Engelbert still records and tours today. Today OK! Good Records is releasing the audio recording of the album commentary, so that you may listen and read along with Enge. Thank you, and Have a Merry Christmas!

“This is a great song that’s a number one on the album, it’s called ‘Absolute Beginner’. It was written by Steve Mac, and I have to say it has a great story line. I think that every one of my songs that I record has to have a great story line so people who listen to it can relate to it. Perhaps it’s part of their life, and sometimes people live sort of lives that are complex. When they listen to a song they say “Hey! that’s my sort of life”. It’s like a release valve for them, it’s great to hear, and it gives them satisfaction. Steve Mac came up with this great song, its number one of my album because it has the same effect on me. I’ve been around the world, I’ve done everything, and every time I go home and I’m with my love I seem to think that I haven’t done enough for her. She is the one I can’t do enough for, I feel an absolute beginner with her.

“The title of the album is called ‘The Man I Want To Be’. It applies to me, its one of the reasons why we chose the title as such. I think it applies to most men in the world who want to prove themselves to their partners, or to people, or anyone else. I think this song is so apropos. It has a great meaning for story behind it and the arrangement is so good because it was done by a very dear friend of mine Johnny Harris. Johnny did an amazing job on it. It was written by Jon Allen from England, he also wrote another song on the album called ‘I Followed My Heart’. I want you to pay attention to this one because I followed my heart and I also am the man I want to be.”

“I do like the song ‘Just the Way You Are’ because it has many reasons for me doing it. I happen to have met the man who wrote the song when he was five years old, the great Bruno Mars. We were in Hawaii, he was five years old when he performed for me. We had a fan club party, my fan presidents came from all over the world and he was the person performing. In his little Elvis suit he did a great job. I told him then “Young man you’re going to be a big star!”, but he’s not a big star he’s a megastar! Now after all these many years I am singing one of his songs, ‘Just the Way You Are’. And not in the same fashion that he does it but a little slower, I made it my style. I hope he enjoys the way I performed it, so Bruno I hope you enjoy it. And of course all his fans.”

4. How Can You Live With Yourself

“‘How Can You Live With Yourself'” by Richard Marx, great song. He must have thought about this a lot when he was writing it. A very talented person indeed. I got the song and I was trying to analyze it, and he’s right. When you are a performer you are two people. I am not the person that walks on stage, I am a totally different person. I completely change because if you’re the same person all the time you become a very boring character. Richard Marx you did a great job on this song, thank you for letting me put it on my album. It’s a great asset and a wonderful piece of writing, I thank you very much.

“It tells a story of how I met my wife for the first time, and how I asked her to dance in a dance hall at the age of 17. It was from then on our lives started. From that dance to now, and were still going strong.  Hopefully she will be able to listen to it very soon, understand it and smile, as I smile every time I sing it. I hope you do too.”

Ed Sheeran is a great writer and a great artist, he’s a man that’s going to be around for a long-long time. Every time you turn the T.V on he’s there, he’s very popular. The kind of songs that he writes are so unusual I thought I would never be able to sing one. But when I started thinking out loud there is a lot of intrigue into the wonderful words that he put into it. It’s so real that you do think out loud. Now he’s done ‘Photograph’ which is unbelievable. Ed Sheeran my friend, I hope you don’t mind me doing a version on my new CD. I am really proud of it and when you listen to it I hope you like it.

“This ones kind of tied up with the family ‘I’m Glad I Danced With You’. It’s a duet, and it’s the only duet on the album. It’s with a little girl, she’s 9 years old and happens to be my granddaughter. She sings like you cannot believe. The song was written by Tony Toliver her father, her mum wrote the lyrics my who is daughter Louise. We sang the duet tougher in the studio together and she did an amazing job. I hope you like this wonderful rendition from a lovey 9 year old little girl. You know what she is going places, like I said Bruno you’re going to be a big star and so is she. The lyrical content of this song is very wonderful because it’s a tribute to my wife. Again because of her condition she can’t sing the song, so my granddaughter is her silent voice there. If anything I’ve played it to her, and when she listens to it she puts a smile on her face. Somehow she seems to understand the words and that’s wonderful. If anything can help we try to give it to her, if something helps let them hear it. It’s a wonderful piece of music and my granddaughter does a wonderful job representing my wife in the song. I don’t know, it brings tears to my eyes.”

“My daughter has been trying to pitch this to me for about 10 years and Tony has been polishing it, getting it ready. Finally they got it to me, the lyrics were written a gentlemen called Jim Martin. It’s an absolute fantastic song, it has a gospel feel to it and the arrangement is terrific. The arrangement was done in Nashville and I recorded it in Los Angeles at Igloo Studios it was amazing. I personally think it has a Grammy tone to it, that’s the way I feel about it. I hope it makes it next year in that sort of category. The song is great listen to it, it has great meaning. They’ve been writing this song for about 10 years and now I’ve got it. I think it’s very special it’s taken a long time to record but I think the time is right, the album is right, and I think this is a hit song.”

9. I Followed My Heart

“‘I Followed My Heart’ is one of the songs on the album which really touched my heart because I felt this song was written for me, it’s my life’s story. I got to meet the writer in London, Jon Allen. He’s a very nice man and he’s written another song for me ‘The Man I Want To Be’. He’s an absolutely brilliant writer, he’s got a great future. I took the song, I recorded it, and my audiences absolutely flip out when I sing this song. Therefore It’s part of the way I am and part of my life, my audience recognizes it and gives a big ovation. That’s the kind of song I want in my show. It has longevity and it will remain in my repertoire forever, thank you Jon Allen”

“This song brings me back in time because I used to do a lot of songs for the German market. We had a lot of big hits over there, this particular song has a great appeal a kind of happy clapping movement it’s very excitable to listen to. I think you’re going to like it because it’s a happy go lucky song.”

“Willie! Thank you so much for ‘Crazy’, your version is absolutely delightful. I know who you wrote it for, God Bless her. She was just the greatest and she made it a big hit around the world. When I heard it I had to sing it, I just had to sing it. I’ve given it a new twist with a Johnny Harris arrangement. Let me know what you think about it, I hope you like it Willie.”

“‘On Broadway’ is a great song, it’s been around for a long time. It’s been recorded by many people including my contemporaries because it has such a great meaning. Everyone wants to appear on Broadway! Being my 50th anniversary it’s such a great time to give it a rebirth. I went into the studio with Johnny Harris who asked to record it for a charity record of his, and I said “Johnny would you mind if I put this track onto our new CD because it is such a wonderful piece of material”. He’s done such a wonderful, unusual arrangement as only Johnny Harris could do. The audiences just love it and I thank you for your great work, talent, and friendship. Thank you pal!”

“‘Welcome to My World’ has always been a favorite of mine. People who have recorded it in the past have been Eddy Arnold, Jim Reeves, and even the great Elvis Presley sang it in his show. It’s a great song for the stage, very entertaining and welcomes people into the theater. It has great lyrical content, I decided to put it on the album because it’s something I keep in my show. I hope my audiences enjoy this particular version.”

“Les Reed is a wonderful man and has been a friend of mine for such a long time. He has put me on the map so many times it’s unbelievable. He’s written some great songs for me like ‘The Last Waltz’, ‘Les Bicyclettes de Belsize’, ‘I Believe in Miracles’, ‘Love is All’ and so many wonderful pieces of material that still have lasting appeal. I keep singing them in my show and it’s 50 years later. Now you’ve given me a song that pays tribute to our country in such a wonderful way. ‘Our England’ is a wonderful song, tribute, and piece of material that is needed at this point and time.”

The Man I Want To Be is available now on OK!Good Records. You can order the CD along with a limited edition Signed Copies and Bundles in the OK!Good Records Shop. The album is also available on Amazon, iTunes, Spotify, Google Play, Barnes & Noble and at music retailers worldwide.