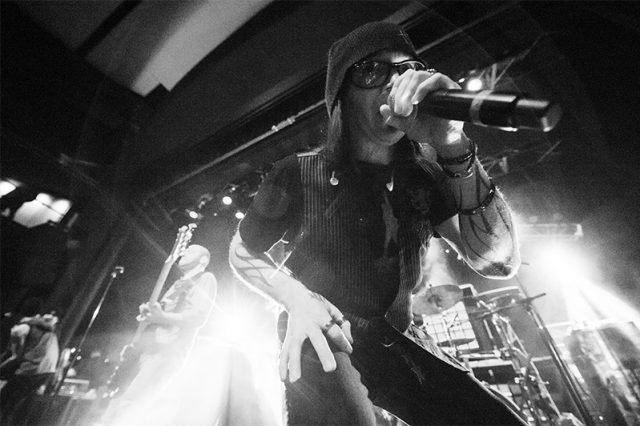 Weapons of Anew front-man, Ray West recently spoke with Hard Rock & Heavy Metal website, Rock in the FastLane for an exclusive interview. In their chat Ray gives some insight into the early days of his previous band, Spread Eagle who were signed by MCA/Universal Records only a few months after forming, along with discussing Weapons of Anew and their new debut album, The Collision of Love and Hate.

Click Here to listen to the full interview on Rock in the FastLane or click the player below:

Rock in the FastLane praised Weapons of Anew’s debut for creating a strong blend of modern metal but with a classic hard rock sound.

Rock in the FastLane: “I think the album really showcases you as a front-man and a vocalist. What was it like writing and recording with this new band? Everybody sounds tight, and it sounds like you’ve been together for a long period of time!”

Ray West: “Well they’re all pros. The guys have been around for awhile and they’re great players that have all done their own gigs. You’re talking about years of experience going into the studio and making this happen.”

Rock in the FastLane: “As far as being a musician and being out on tour, do you enjoy it more now than you did back then?”

Ray West: “Well I think the opportunities are rarer, so when you’re given a chance to go and play for people you appreciate it that much more. Not that I didn’t appreciate it back in the day, but there were some times I was a little “Jose Cuervo-ed out” and didn’t realize everything that was going on. Now I’m very sober and I feel like I’m a much more powerful performer than I was. It’s all growth, man. The further you go into it and the more you study your instrument, the more you develop a tone and sound you like and that takes awhile sometimes.”

Despite only just releasing their debut album, Weapons of Anew already have two North American tours under their belt, sharing the stage with big names like Alter Bridge and Tesla. Ray discussed what the road has been like for the new band.

Ray West: “I like the way people react to the songs even when they don’t know the stuff. When we went on tour with Alter Bridge, we just threw a vibe out every night. Because the crowd doesn’t know the songs but you just vibing them to death. We were able to move some bodies and some shows it was much more. You go out there and you battle like crazy to win over that audience, even if it’s one person at a time. It’s a cliche but its true.”

Rock in the FastLane wrapped up the interview by complimenting Ray’s work as a musician throughout the years. “There’s so many good songs on this new one. Like I said it demands to be payed loud and it has so much too it. It has a ton of melody, a huge sound, and I really hope that this turns into multiple releases from you guys.”

Be sure to check out the full interview on YouTube or at Rock in the FastLane.

Weapons of Anew’s, The Collision of Love and Hate is available now on OK!Good Records. Pick up a CD copy in our web-store, on Amazon, or find the album on iTunes, Spotify & Bandcamp.

Listen to their track “Speed” below: