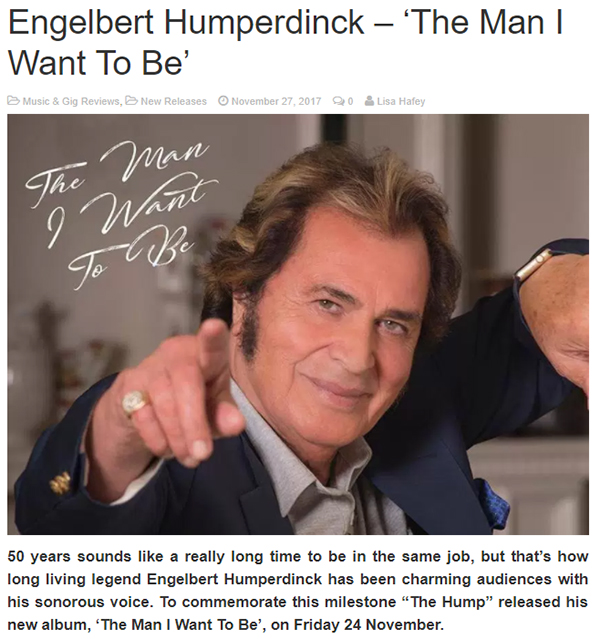 Essentially Pop’s, Lisa Hafey has released a glowing review of Engelbert Humperdinck‘s new album, The Man I Want to Be. Hafey called the singer’s first album of original material in over a decade album “a very pleasant surprise,” stating that Engelbert’s voice is “as rich and powerful as it ever was.”

“We’re particularly touched by his treatment of Ed Sheeran’s ‘Photograph’ – already a deeply moving song, Enge given it an almost country edge, and stripped it back to just his voice and some very light piano and strings. Dedicated to his wife of 53 years, Patricia Healey, who’s in the advanced stages of Alzheimer’s Disease, the songs on the album have been chosen to reflect his love for her.”

Hafey praised Engelbert’s unique arrangements of the album’s cover songs, like Willie Nelson’s “Crazy,” and Bruno Mars’ “Just the Way You Are,” which become much more than simple covers as they are transformed to be “distinctively Engelbert.”

“Most of the new songs have been written with some of Engelbert’s life experiences in mind, drawing from them in a meaningful way. Title track, ‘The Man I Want To Be’, written by Jon Allen, is a stirring treatise from a man who’s looking back on his life and seeing things he’s regretted but even with finite time ahead of him (Humperdinck turned 81 this year) he knows there’s still room for change in his life, and he’s grateful to those who love him for who he is, regardless.”

‘The Man I Want to Be’ was released on November 24, 2017 on OK! Good Records. You can order the CD along with a limited edition Signed Copy in the OK!Good Records Shop. The album is also available on Amazon, iTunes, Google Play, Barnes & Noble and music retailers worldwide.