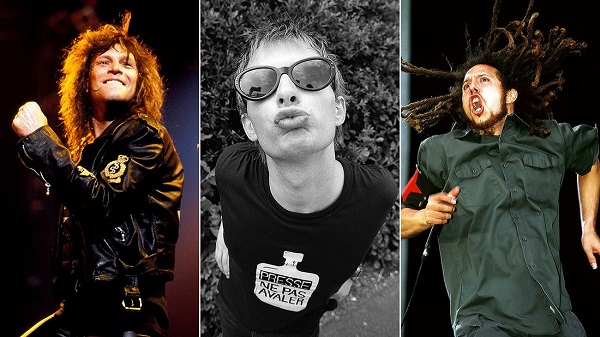 Rock and Roll Hall of Fame’s Nominations for 2018

The nominations for the Rock and Roll Hall of Fame’s Class of 2018 are in, and the list includes Radiohead, Rage Against The Machine, Bon Jovi, Depeche Mode, Judas Priest, Kate Bush, the Cars, Dire Straits, Eurythmics, J. Geils Band, LL Cool J, MC5, the Meters, the Moody Blues, Rufus featuring Chaka Khan, Nina Simone, Sister Rosetta Tharpe, Link Wray and the Zombies. The top vote-getters will be announced in December and inducted on April 14th at a ceremony at Public Hall in Cleveland. HBO will broadcast the ceremony later in the year.

To be eligible for this year’s ballot, each nominee’s first single or album had to be released in 1992 or earlier. Some of the nominees have appeared on previous ballots, but this is the first appearance for Kate Bush, Dire Straits, Eurythmics, Judas Priest, the Moody Blues, Radiohead, Rage Against The Machine, Nina Simone and Sister Rosetta Tharpe. Radiohead and Rage Against the Machine are the only acts to appear on the ballot in their first year of eligibility, while this marks the fifth appearance for the J. Geils Band, the fourth for LL Cool J and the Meters, the third for the Cars, MC5 and the Zombies and the second for Bon Jovi, Depeche Mode, Rufus featuring Chaka Khan and Link Wray.

For the sixth consecutive year, the public will have the opportunity to vote alongside the more than 800 artists, historians and music industry insiders of the Rock Hall voting body. From now until December 5th, fans can vote on the Rock Hall’s site for the nominees they’d like to see inducted. The top five acts will comprise a “fan’s ballot” that will count as one of the ballots that determine the class of 2016.