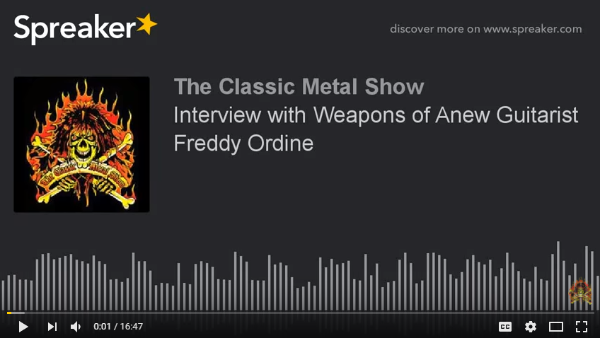 Weapons of Anew have had an exciting month so far. The band released their debut album ‘The Collision of Love and Hate‘ on Friday, September 15th. They also embarked on a North American Tour alongside Tesla. Needless to say, the band has been very busy. Weapons of Anew guitarist, Freddy Ordine recently caught up with The Classic Metal Show for an exclusive interview where he discussed the band, their YouTube series, tour, and much more. Listen to the full interview below:

You can also listen to the full interview over on Spreaker.com: https://www.spreaker.com/user/cmsrocks/interview-with-weapons-of-anew-guitarist

Weapon of Anew’s debut album is currently available for digital purchase on iTunes, Google Play, Amazon, and Bandcamp. It is available on all major streaming platforms including Spotify and Apple Music.’The Collision of Love and Hate’ will be available for physical purchase at music retailers nationwide on Friday, November 3rd. Physical copies will be available at all Weapons of Anew tour dates.