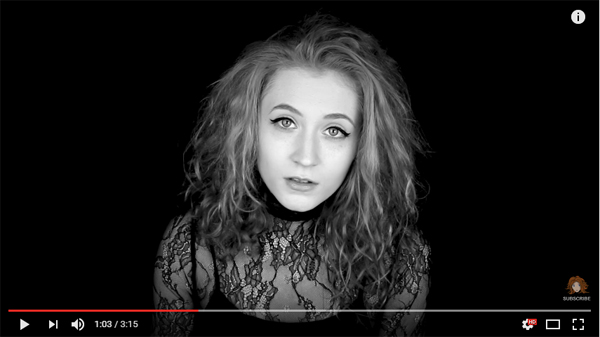 Singer-songwriter Janet Devlin has released a live performance video for her new original song, “Chandeliers” featured in the upcoming indie film, Songbird. The film is the latest work from multi-award-winning screenwriter Tommy Draper (Pro Kopf, Stop/Eject, Wasteland) and Janet Devlin will be making her acting debut as the lead character, Jennifer.

Watch her performance of “Chandeliers” below:

More on Songbird from the film’s Indiegogo campaign:

Songbird is the latest film from multi-award-winning screenwriter Tommy Draper (Pro Kopf, Stop/Eject, Wasteland). It tells the story of a shy open-mic-night singer called Jennifer, who has her voice stolen by a jealous ancient creature called The Collector.

Jennifer has to embrace the world of magic, and go on a literal and figurative journey to ‘find her voice’, which is hidden somewhere inside the mysterious Blackmoor Woods…

Whether you’re new to the fantasy genre, or whether you’ve loved it since the days of Legend and Willow (like we have), this film will have something for you. It will also be a film for music fans, set in the world of the underground music scene, and featuring some brand new songs by Janet Devlin.

Janet is currently working on finishing up her new album, Holy Water, the follow up to her critically acclaimed debut, Running With Scissors. Her debut album along with her latest single, “Outernet Song” are available now everywhere on iTunes, Amazon, Google Play and Spotify. We also have some exclusive Janet Devlin merch in the OK!Good Webstore.

Be sure to subscribe to Janet Devlin’s YouTube Channel for more live performance videos, vlogs, and music!