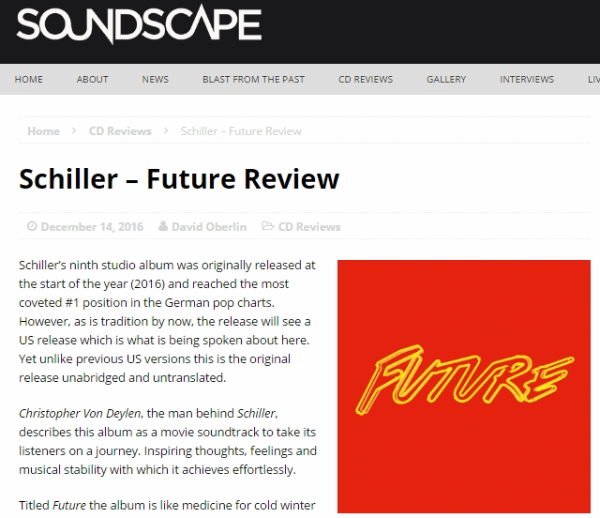 Critically acclaimed electronic music artist Schiller, is celebrating the release of his ninth studio album ‘Future,’ which was release on Friday, December 16th in North America via OK!Good Records. Having already topped the German Pop Albums Charts, the album has begun receiving rave reviews state-side. Soundscape Magazine has review the album and has given it a 9 out of 10 rating. You can read some of the review below, but be sure to head over to soundscapemagazine.com for more.

Christopher Von Deylen, the man behind Schiller, describes this album as a movie soundtrack to take its listeners on a journey. Inspiring thoughts, feelings and musical stability with which it achieves effortlessly.

Titled Future the album is like medicine for cold winter nights with its soothing and elevating properties. With the soft and warm production it has the qualities of a perfect album to get cozy to alone with ones dreams.  Preferably with a hot cup of cocoa and woolly socks and while it’s not the solution to whatever became of 2016 it certainly helps.

Future and its sixteen tracks filled with wonder and bold sounds holds a canvas to project your thoughts and fears onto but it’ll gently assuage them within its own two-hour travel time. Meeting with vocal collaborators Arlissa, Cristina Scabbia, Emma Hewitt, Kéta, Tawgs Salter, Sheppard Solomon, and featuring lyrics written by Sharon StoneFuture has set its trajectory to another world. Communicating ideas directly through the limbic system.

It’s definitely music as we know it but it has a cleaner atmosphere where living organic melodies thrive between its synthetic components, and while many of the leads and pads focus on the high register they’re dutifully complimented by the deep and almost ominous rhythms that ground the compositions in music. Using them to non-nonchalantly create a stark contrast throughout the compositions. Eliciting imagery of sounds made like fire in the snow, and this is an album to warm frozen tears, where the dynamics bring a tenderness to machinery.