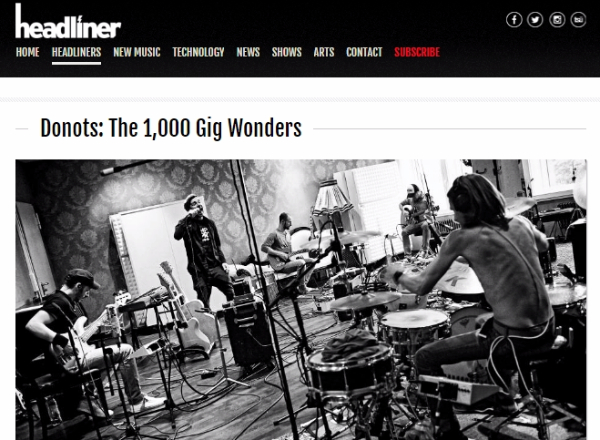 Critically acclaimed German punk rockers, DONOTS, recently caught up with renowned Headliner Magazine, where they discussed the punk scene in Germany, plans for the future, and of course their upcoming 1,000th gig. Check out some of the exclusive interview below, but be sure to head over to headlinermagazine.net for more.

“Tonight is very special because we’re doing the opening slot,” Ingo Knollman tells me. “Last year we co-headlined the festival, and nobody knew we were on the schedule until yesterday when they told everybody we’re on the bill. And we’re going to get to play with Black Flag, which has been on my bucket list for a long time!”

Donots are quite easily the biggest punk band in Germany, but beyond that have done the impossible, breaking out of Europe. For two decades, they’ve been constantly part of huge punk tours here in the States and in the UK. The band formed in 1993, and have supported the likes of Blink-182 and Anti-Flag.

2014 marked the 20th anniversary of their first ever single in German, Das Neue bleibt beim Alten (The New Stays Old). They followed the success of the track with a full length album sung in German entitled Karacho. They also released the English version of Karacho, called “¡CARAJO!”.

“Well when you’re in a band for decades,” Knollman says, “and if you’re not someone like AC-DC or The Ramones, who invented a style, then to me it’s sort of obligatory to keep moving on and trying out new stuff. So one day we were like, ‘hey, why didn’t we ever record songs in German?’ For the anniversary single, we invited Tim McIlrath from Rise Against to join us on the first ever German Donots song. I basically transcribed the lyrics into English gibberish so he could imitate the German language!”

Given they’ve been around so long, it’s perhaps unsurprising that this December, Donots will play their 1,000th show as a band. Nonetheless, it’s a great milestone for them to reach to attest to their longevity.

“Yeah, well, sort of,” Knollman says, with a smile. “Our drummer keeps a list of all the shows we’ve played, but at least 10 or 20 have fallen through, so it’s hard to say exactly. But you have to do an official show, so it will be the circa 1,000th show! It’s cool, because the place we’re holding it at, we play around every two years, and the shows normally sell out at 6,500 people, which is a very big deal for us. And of course this time it will be even more special.”

For more from this exclusive interview please visit, headlinermagazine.net

DONOTS Album ¡CARAJO! is available for digital purchase on iTunes, Amazon, andGoogle Play. It is also available for streaming on Spotify and Bandcamp.

Physical copies of ¡CARAJO! can be purchased on the OK!Good Records web-store.