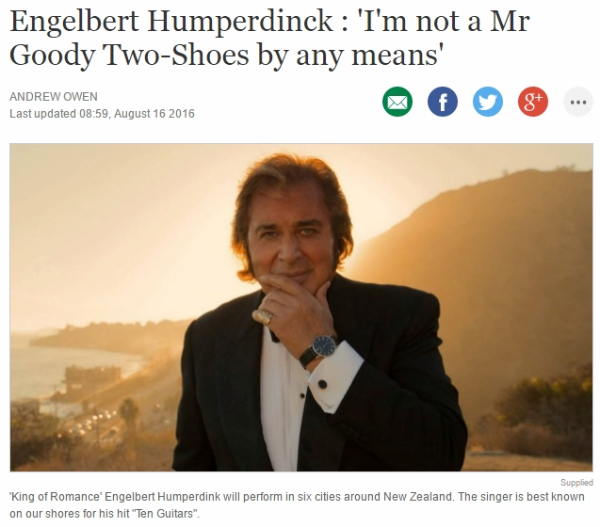 Engelbert Humperdinck : ‘I’m Not a Mr Goody Two-Shoes By Any Means’

International music legends Engelbert Humperdinck is getting ready to bring his tour to New Zealand, where he will have multiple performances beginning on Wednesday, August 31st in Wellington, New Zealand. The King of Romance recently spoke with New Zealand media outlet, Stuff, about his upcoming performances, his relationship with Elvis, and much more. Read some of this exclusive interview below, but be sure to head over to Stuff.co.nz to read the full interview.

“I’ve been to New Zealand before, many times,” he says. “And of course it has a significance to me because I do have something that’s very special in New Zealand. I have 10 Guitars, which is a very popular song, and I understand it’s like the second national anthem over there.

“I played to the biggest audience I’ve ever played to in my life in New Zealand. I couldn’t see the end of the crowd. I understand it was over 200,000 people in a park somewhere. And there were screens everywhere. I can’t remember where it was.”

That’s probably understandable for a man who until recently performed around 300 concerts every year. These days he’s cut that back to around 90, but otherwise age doesn’t appear to be wearying him too much.

“The funny thing is that since I’ve turned this age, people turn around to me and say you look really good now. I must have looked like s*** before. The way they talk to you I can’t believe it. I feel I’m the new 50 or 60 or whatever it is. I still move on stage like I’m 50. I love it. When I walk on stage it’s a release valve for me. Life is stressful anyway, so therefore when I walk on stage it releases all those stressful situations and I feel good about myself.”

Humperdinck, who has sold 150 million albums, is one of the last links to a bygone age of showbiz. He burst on to the scene in the 1960s with Release Me and has continued to be a huge draw. While never exactly rock ‘n’ roll, along the way he has met, and worked with, just about everybody.

“You know, Elvis took my sideburns,” he says, matter-of-factly. “He didn’t start with the sideburns. I was the first one to bring them to America and around the world, and then he took it from me and I said to Elvis, ‘You took my sideburns’, and he said, ‘Well, if it looks good on you it’s gonna look good on me.’ And that’s how it went. From then on we were good friends.

Elvis, as we know, died tragically young – just 42. How did Humperdinck survive where others from the period fell by the wayside?

“I didn’t succumb to all the, er, bad habits that exist in our industry,” he says after a brief pause. “You know, like the drugs and all that business. I’m not a Mr Goody Two-Shoes by any means, I want to tell you. I do love my alcohol, I do love to drink. I love my wines, my spirits, whatever it is. I like to have a good drink every now and again, but I’m not into drugs. And that’s probably why I’m still around today.

“I have a lot of great memories,” he adds. “I’ve had a very successful career and I’m still going, and I want to keep going till God calls me. I love what I do and I’m glad that people still love what I do. I’m booked, I come there, I do my job and I hope they like what I bring to them.”

For more from this exclusive interview, visit: Stuff.co.nz