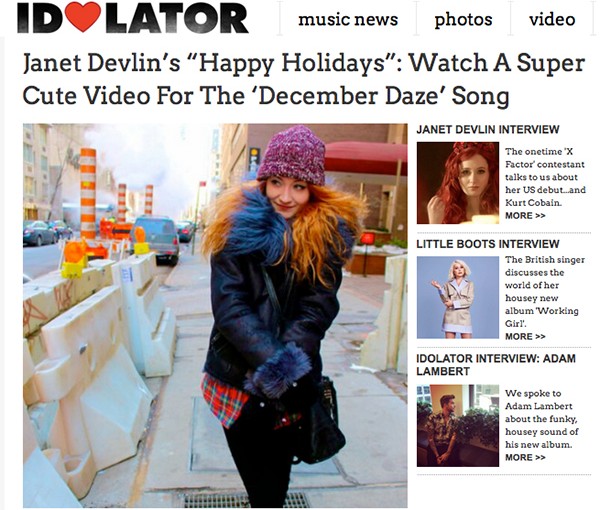 To celebrate Janet Devlin‘s 21st birthday (today, November 12th), Idolator has premiered Janet’s new super cute music video for “Happy Holidays,” the first single off of her upcoming EP December Daze. Janet’s “cute-as-a-button” festive EP is due out Friday, November 27th and features covers of classic holiday tunes such as “Have Yourself a Merry Little Christmas,” “Silent Night,” and Joni Mitchell’s “River.” “Happy Holidays” is an original song, as well as the title track “December Daze.” You can watch Janet’s “Happy Holidays” video below or head over to Idolator.

This track was born through the beauty of procrastination. I’d just started working on this Christmas EP and I should have been selecting tracks for the project — however, I got a little distracted by my ukulele. I thought it’d be fun to attempt to write my own Christmas track, as I’d spent a week listening to only Christmas songs. It wasn’t until I started writing it that I realized that every sentimental line for a chorus had already been used, so I thought it’d be rather humorous to throw everything into the mix —  hence the line “have yourself a merry happy jolly festive Christmas time” came to be. As this is the first track of mine to be released that was written solely by myself, I thought it’d be fun to attempt to play the instruments on it as well. Along with the vocals, I’m playing drums, ukulele, glockenspiel and other bits like the bells and shakers and with some magic production dust they’ve managed to become a part of the track. As this song has such a carefree fun vibe, I knew that it’d perfect to film the whole process. It was guaranteed that there would be a few laughs along the way.