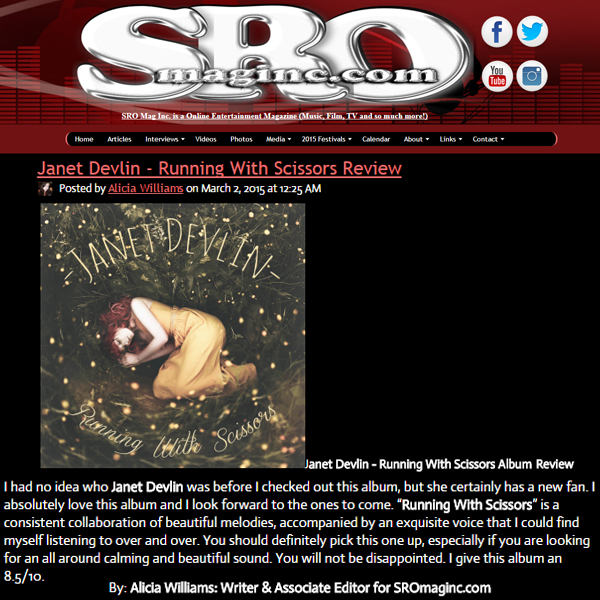 Janet Devlin’s debut album, Running With Scissors continues to receive positive reviews since its February 10th release. The latest review comes from SRO Mag Inc. (Standing Room Only Magazine), an online entertainment magazine dedicated to bringing readers music news and bands that are both mainstream and under the radar.

Writer & Associate Editor Alicia Williams broke down the album track-by-track, highlighting some of her favorites:

Track 4: “Lifeboat” In this song, she talks about being ok and sends a positive message of being able to be happy just being herself. The chorus says it all. “I don’t need a lifeboat/I’m learning how to swim/It may look like I’m drowning, but I’m learning how to live/I don’t need your rescue for I am ok now/I can see the shoreline so turn your lifeboat around.” The positive message of strength and courage to face life alone really grabs at my heart strings. It is hard for most to imagine having to be content with our own independence, but this is an astonishing way to look at it. This is a wonderful song with a powerful message. It is, undeniably, one of my favorite tracks on the album.

Track 8: “Friday I’m In Love” This song is one of my favorites on the album. I was skeptical when I saw this track listed, because I am a huge fan of The Cure; however, she does a fantastic job on this cover. Her vocals are amazing and the acoustic guitar adds a nice touch to this classic. The tempo is much slower than the original, but it works well with her style. I was very impressed by her ability to pull off such a well loved and respected song.

Williams ended her review by giving Running With Scissors a score of 8.5/10, stating the album was a long awaited breath of fresh air.

I had no idea who Janet Devlin was before I checked out this album, but she certainly has a new fan. I absolutely love this album and I look forward to the ones to come. “Running With Scissors” is a consistent collaboration of beautiful melodies, accompanied by an exquisite voice that I could find myself listening to over and over. You should definitely pick this one up, especially if you are looking for an all around calming and beautiful sound. You will not be disappointed.

Check out the full album review at: sromaginc.com.

Running With Scissors is available now on iTunes, Amazon, Google Play and our webstore. The album is also streaming on Spotify and Bandcamp. Also, be sure to check out our OK!Good Records exclusive Janet Devlin merchandise in our webstore.