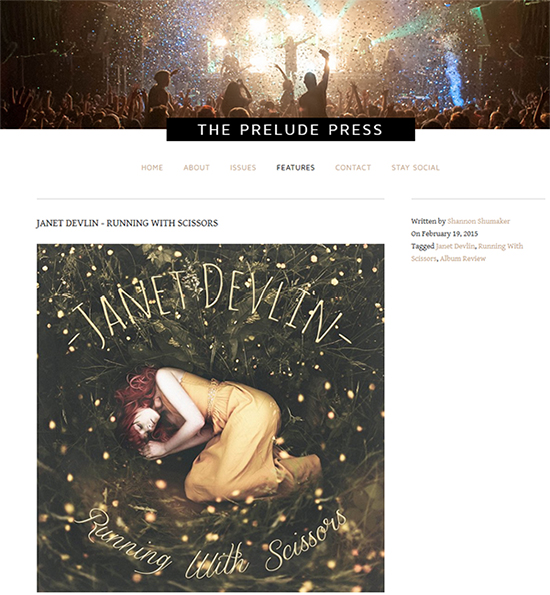 Irish singer-songwriter Janet Devlin has recently released her debut album Running With Scissors, which has just been reviewed by The Prelude Press where they rated the album a 4 out of 5. “From folk and country to indie and pop, she has mastered this release, and the outcome is phenomenal,” says The Prelude Press. “Devlin is bound to have you smiling within the first few notes of “Creature Of The Night” and her unique sound will keep you captivated all the way to the end of the album’s final track, “Whisky Lullabies.” You can read some of the album review below, for the full review please visit thepreludepress.com

The first thing that really stands out about Running With Scissors is the warm and inviting tone of Devlin’s voice. On top of that, her amazing vocal range is perfectly showcased in her insane runs and by the time that the full band comes in on the first track, I want to get up and dance. “House Of Cards” is a perfect transition, as well. The second song is considerably more poppy than “Creature Of The Night,” but without sounding too sugar-coated. The balance between folk and pop in the first few songs on the album is flawless. Track after track, Devlin delivers catchy poppy melodies laced with folky songwriting that are impossible not to fall in love with.

Arguably the best thing about Running With Scissors is the way that Janet Devlin has managed to mesh multiple sounds together. While the majority of the album is very poppy and upbeat, it’s not without its slower folky songs as well. Even the pop tracks on the album have a little bit of a folk or country feel to them, and that’s what makes the sound so unique. Janet Devlin has managed to create a sound that suits her voice perfectly with Running With Scissors, making this album an absolute must-listen.

You can read the full album review on The Prelude Press