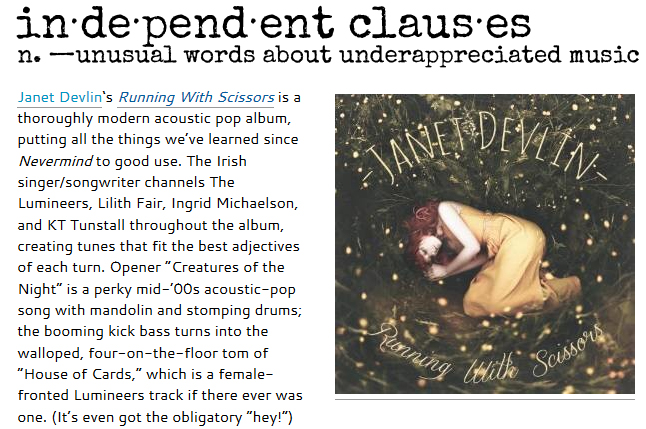 Janet Devlin’s debut album Running With Scissors has received a rave review by Independent Clauses. The review describes Running With Scissors as fun, smart, and melodically mature. “The Irish singer/songwriter channels The Lumineers, Lilith Fair, Ingrid Michaelson, and KT Tunstall throughout the album, creating tunes that fit the best adjectives of each turn,” says Independent Clauses.

Janet Devlin’s Running With Scissors is a carousel of delights: no matter which song you pick, it will take you for a warm, lovely trip. If you’re into acoustic pop, you should know about Devlin.

Independent Clauses briefly discusses Janet’s song “House of Cards” comparing it to The Lumineers track if there were to be a female vocalist. You can watch the video for “House of Cards” below:

You can read the full review on independentclauses.com