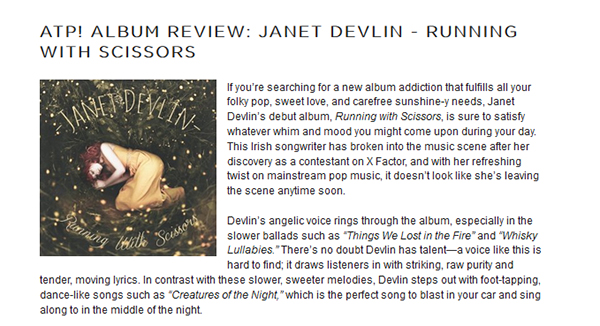 Devlin’s angelic voice rings through the album, especially in the slower ballads such as “Things We Lost in the Fire” and “Whisky Lullabies.” There’s no doubt Devlin has talent—a voice like this is hard to find; it draws listeners in with striking, raw purity and tender, moving lyrics. In contrast with these slower, sweeter melodies, Devlin steps out with foot-tapping, dance-like songs such as “Creatures of the Night,” which is the perfect song to blast in your car and sing along to in the middle of the night.

Running With Scissors has something for all music enthusiasts, and it’s hard not to love Devlin’s sweet and bright vocals. Really, it’s hard to find anything not to like within this perfect little package of musical goodness of an album. Her Irish roots are infused throughout her songs without overpowering the record. Already releasing a gem like this at the age of 19, we’re pumped to see what else Devlin’s future in music holds in store. Overall, Running With Scissors is refreshingly unique, and uniquely refreshing.”

Make sure you read the whole album review on Alter The Press!