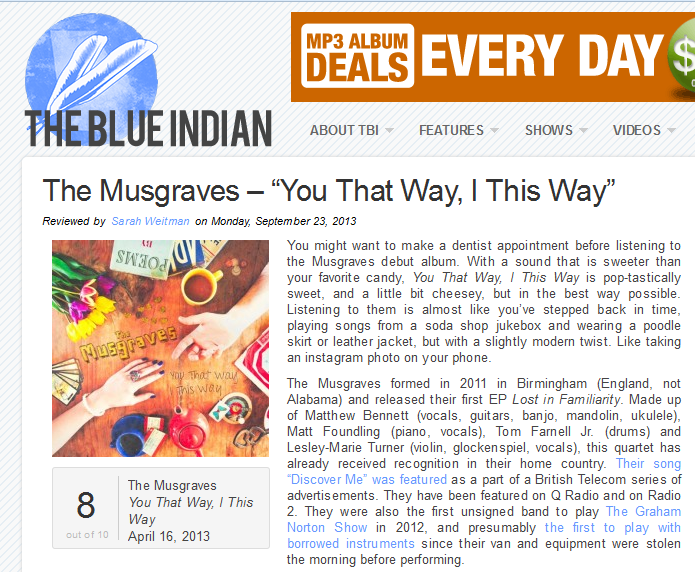 The Blue Indian Reviews “You That Way I This Way”

Music blog, The Blue Indian posted a really great review of The Musgraves’ debut album You That Way I This Way. The Blue Indian calls the album “pop-tastically sweet” and compare them to the sounds of the 1950s (poodle dresses and all). They gave the album a very solid 8/10 and we can’t be any happier about that! Read the full review below and check out the original article here.

You might want to make a dentist appointment before listening to the Musgraves debut album. With a sound that is sweeter than your favorite candy, You That Way, I This Way is pop-tastically sweet, and a little bit cheesey, but in the best way possible. Listening to them is almost like you’ve stepped back in time, playing songs from a soda shop jukebox and wearing a poodle skirt or leather jacket, but with a slightly modern twist. Like taking an instagram photo on your phone.

The Musgraves formed in 2011 in Birmingham (England, not Alabama) and released their first EP Lost in Familiarity. Made up of Matthew Bennett (vocals, guitars, banjo, mandolin, ukulele), Matt Foundling (piano, vocals), Tom Farnell Jr. (drums) and Lesley-Marie Turner (violin, glockenspiel, vocals), this quartet has already received recognition in their home country. Their song “Discover Me” was featured as a part of a British Telecom series of advertisements. They have been featured on Q Radio and on Radio 2. They were also the first unsigned band to play The Graham Norton Show in 2012, and presumably the first to play with borrowed instruments since their van and equipment were stolen the morning before performing.

You That Way, I This Way starts off with “The Way You Make Me Want You” and “Fortune Teller,” both songs filled with simple hooks and upbeat rhythms that make all the songs so dang catchy that you’ll be singing them for days. “It’s You” is an adorable love song that is just asking to be made into a flash mob proposal (“I know you without sight, sound, or touch, or taste/You’re my atmosphere, my gravity and grace”; “I sing this with full lungs and heart that means it”). Like the make-up of a classic Beatles song, there’s not much meat to “It’s You,” only a short chorus and a few actual verses, but those few verses hold a lot of meaning. “Last of Me” was released as their debut single and, as Ok! Good Records describes, “explores the imminent end of a long term relationship – the loss of love, friendship and, ultimately, identity – but in true Musgraves style, it sits on a feel-good alt-pop arrangement.” Of all these songs, this was definitely a great choice for the single. It has one of the strongest vocal performances, a fantastic instrumental performance, and retains the overall upbeat rhythm of the album, despite having a more melancholy story. “Discover Me” and “Seventeen Days” both show The Musgraves’ versatile ability to write slower, more emotion driven songs as well, hopefully preventing them from being pigeonholed into being able to perform upbeat pop songs.

Overall, You That Way, I This Way is made up of eleven catchy, short love stories. Since I first listened to them, I knew they reminded me of another band. The only problem is that they have enough of their own sound to make it hard to compare them. I will likely have to turn to social media for help. Though, honestly, I’ll probably get too distracted listening to worry about it. You That Way, I This Way came out in the US on April 16, 2013 on OK! Good Records.
-Sarah Weitman, September 23, 2013

The Musgraves’ debut album You That Way I This Way is now available. 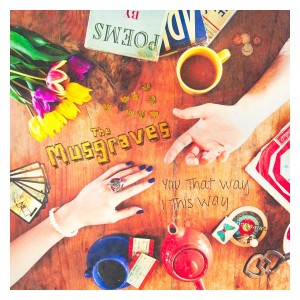