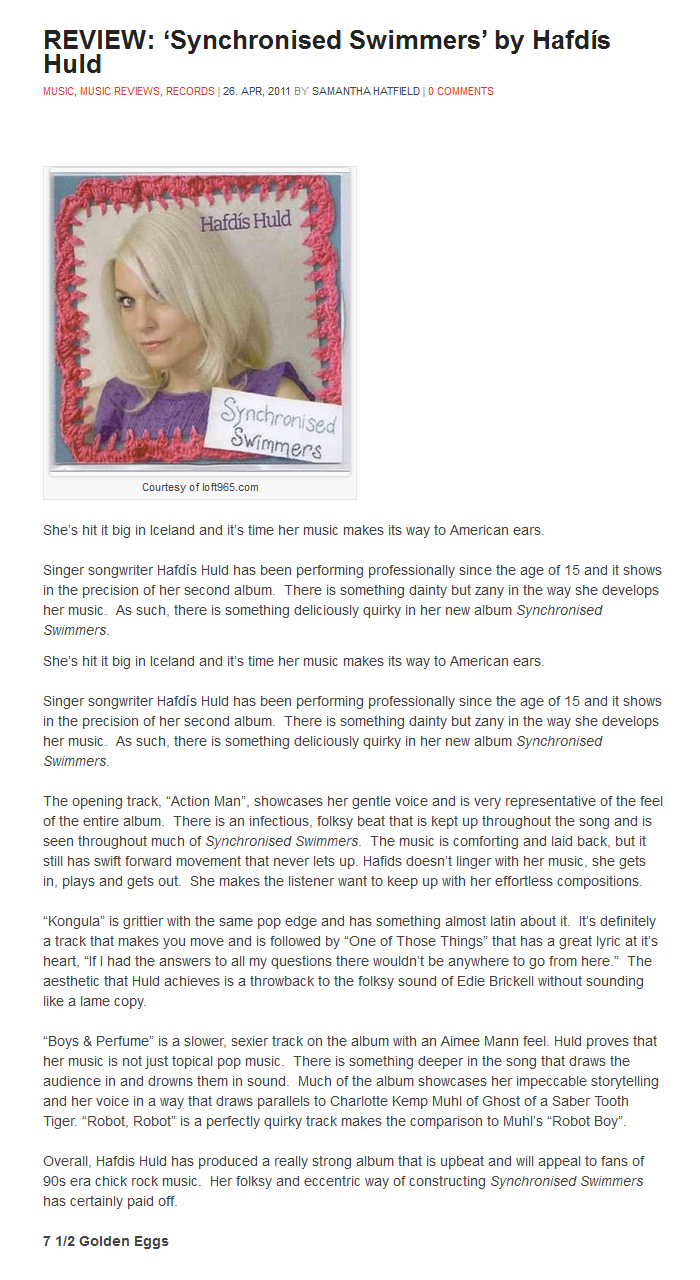 Buzzlegoose wrote up a bubbly review on Hafdis Huld’s new album, Synchronised Swimmers. Buzzlegoose is a full featured e-zine that posts up news and reviews for film, music, and books.

She’s hit it big in Iceland and it’s time her music makes its way to American ears.

Singer songwriter Hafdís Huld has been performing professionally since the age of 15 and it shows in the precision of her second album.  There is something dainty but zany in the way she develops her music.  As such, there is something deliciously quirky in her new album Synchronised Swimmers.

The opening track, “Action Man”, showcases her gentle voice and is very representative of the feel of the entire album.  There is an infectious, folksy beat that is kept up throughout the song and is seen throughout much of Synchronised Swimmers.  The music is comforting and laid back, but it still has swift forward movement that never lets up. Hafids doesn’t linger with her music, she gets in, plays and gets out.  She makes the listener want to keep up with her effortless compositions.

“Kongula” is grittier with the same pop edge and has something almost latin about it.  It’s definitely a track that makes you move and is followed by “One of Those Things” that has a great lyric at it’s heart, “If I had the answers to all my questions there wouldn’t be anywhere to go from here.”  The aesthetic that Huld achieves is a throwback to the folksy sound of Edie Brickell without sounding like a lame copy.

“Boys & Perfume” is a slower, sexier track on the album with an Aimee Mann feel. Huld proves that her music is not just topical pop music.  There is something deeper in the song that draws the audience in and drowns them in sound.  Much of the album showcases her impeccable storytelling and her voice in a way that draws parallels to Charlotte Kemp Muhl of Ghost of a Saber Tooth Tiger. “Robot, Robot” is a perfectly quirky track makes the comparison to Muhl’s “Robot Boy”.

Overall, Hafdis Huld has produced a really strong album that is upbeat and will appeal to fans of 90s era chick rock music.  Her folksy and eccentric way of constructing Synchronised Swimmers has certainly paid off.

You can read the original review here: http://www.buzzlegoose.com/music/review-synchronised-swimmers-by-hafdis-huld/