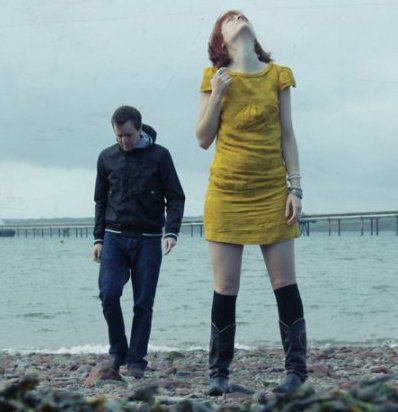 In a feature on Spiral Earth, General Manager at WPSC 88.7 FM, Rob Quicke, writes about Paper Aeroplanes’ visit to their studios while in the States this past November.

Here’s what Rob had to say about the Welsh folk duo’s US debut:

“…Paper Aeroplanes are setting up to play a special acoustic session for my radio station, WPSC 88.7 FM, in Wayne, New Jersey. I am always impressed by the sheer guts it takes for musicians to play under the harsh glare of fluorescent lighting in the early afternoon with nothing more than two acoustic guitars to hide behind. In my opinion, it is a true test of talent. I have been in more sessions than not when an artist is unable to deliver their music to any degree like their recorded versions. Not this time.

They play three songs: Cliché, Not As Old and Take It Easy from their album The Day We Ran into the Sea (OK! Good Records). Every song is performed gracefully and delicately. In the control room, producer Risa Pappas and I are spellbound by the magic coming through the speakers. The shimmering vocals of Sarah Howells and the gold-flecked pickings of Richard Llewellyn’s mandolin move us into that state where we don’t say anything but let the thrill of what we are hearing remind us why we chose our career paths. After the three songs we’re sorry it has to end. Everyone at the station has been won over by the softly spoken Sarah and Richard.” – Rob Quicke

Visit Spiral Earth to read the rest of the article and to hear the full interview, produced by Risa Pappas.

Purchase The Day We Ran Into The Sea here: http://okgoodrecords.com/blog/2010/11/03/paper-aeroplanes-the-day-we-ran-into-the-sea/