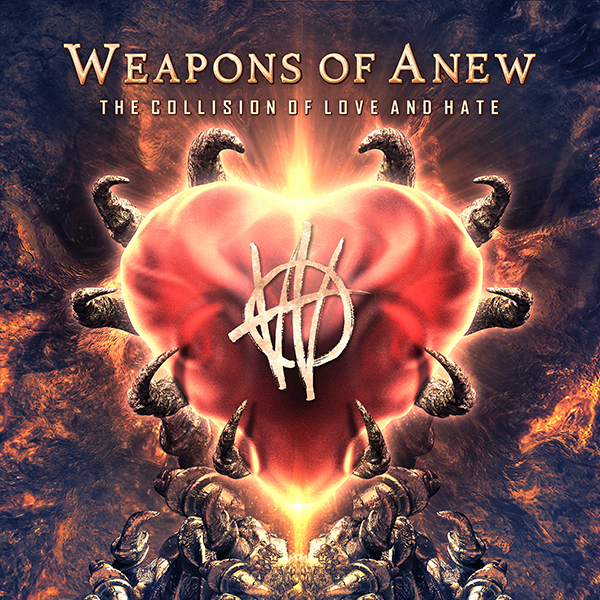 Earlier this month, Weapons of Anew, the dynamic new band that features Freddy Ordine, Ray West, Stefan “Reno” Cutrupi, Chris Manfre, and Kris Norris, announced they will be releasing their debut album ‘The Collision of Love and Hate’ on September 15, 2017 via OK!Good Records. The forthcoming album is available for pre-order on iTunes, Google Play, and Amazon Music. Pre-order the album now, so it will automatically be in your library on release day.

The quintet will be hitting the road this fall with Tesla, beginning on September 19th through October 5th. Speaking about the tour, Ray West said, “I’m very psyched to go out on the Tesla tour.  I’ve been a Tesla fan for a long time. I also happen to think Jeff Keith has one of the coolest voices around.  For me it’s a real privilege to be playing for their audiences. I have a good feeling we will connect with them.  I’m all in, all positive!”  Ordine remembered being a kid when Tesla’s “Five Man Acoustic Jam ” came out, “I dug it. So it’s always an honor to be able to tour with an artist I grew up listening to.”

Earlier this year, Weapons of Anew halted their recording sessions to go on tour with Alter Bridge.  “When we went out with Alter Bridge, as Weapons of Anew,” states West, “we had never played a live show together before.  I think we learned a lot about ourselves as performers and that our music translated well to a live audience.”  Ordine states, “We were able to really dial the songs in on the Alter Bridge tour. They are exactly where we wanted them.  They are burnt into us all now.”  West continues, “Let’s face it, most people don’t go out to see the 1st band on a 3-band bill, so winning people over was our mission. We all worked very hard and as a band we felt it paid off.  Audiences were very generous to us, but every fan that talked to us after the shows, asked ‘We really liked you guys, how can I hear more songs?  Where can I get the album?’  Now we can say, well it’s right here!”

Pre-order ‘The Collision of Love and Hate‘ on iTunes, Google Play, and Amazon Music now!

Weapon of Anew’s debut single “Killshot” is available via for digital purchase on iTunes, Bandcamp and the OK!Good Shop. The track is also streaming on Spotifyand SoundCloud.