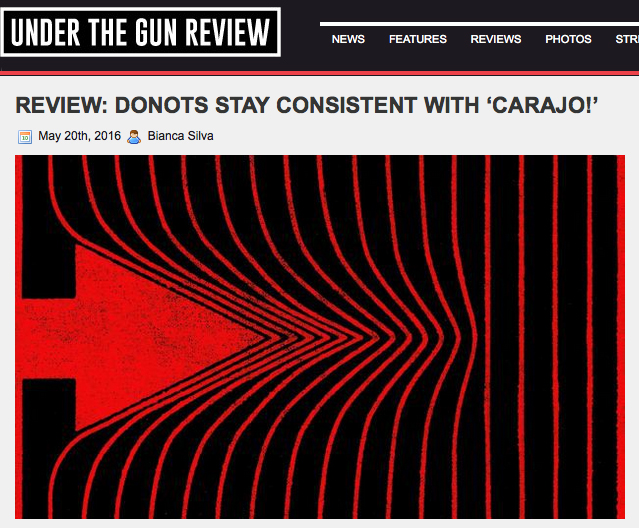 Critically acclaimed punk rockers DONOTS have released their 10th studio album, entitled ‘¡CARAJO!,’ which has been receiving rave reviews. Under The Gun Review calls the album a  “surefire sing-along album that can be blasted from the car to the confines of your bedroom.” Under The Gun Review gave the album an outstanding 8 out 10 rating. Check out more from their review of ‘¡CARAJO!’ below:

With ten albums under their belt throughout the last two decades, it’s pretty safe to say that DONOTS is one of Germany’s premier punk acts. They have served as support for several bands in the punk sub-genres, including Green Day, Midtown, and Rancid. They even featured Frank Turner on their 2012 album Wake The Dogs.

One thing the band also has down is the ability to create catchy, sing-along tracks that somehow avoid becoming formulaic. ¡CARAJO!, the English version of last year’s tenth album release,Karacho, provides a wide array of genre-fusing with 14 tracks.

“I Will Deny,” the opener, slowly builds up into something that becomes jam-packed and powerful.

The rest of album, at least musically, varies. The track “No Part Of It” is heavily pop-punk and emo-influenced with an impactful chorus that explains the political subtext of the track. “The pride and the violence / the arrogance just makes me sick / This just can’t be all there is / I want no part of it / From lies and dead silence / to hatred and violence / I want no part of it,” frontman Ingo Knollmann sings. Similarly, “I’m On My Way Back,” adds to its emo-inspired sound with post-hardcore and alternative rock.

¡CARAJO! winds down with the softer tracks “No Matter What” and “Camden Station, 1 AM.” It plays out as if you’re unwinding and relaxing after a night of partying.

For more from Under The Gun Review, visit: UnderTheGunReview.net

DONOTS ‘¡CARAJO!’ is available for digital purchase on iTunes, Amazon, and Google Play. It is also available for streaming on Spotify and Bandcamp. Physical copies of ‘¡CARAJO!’ can be purchased on the OK!Good Records web-store.