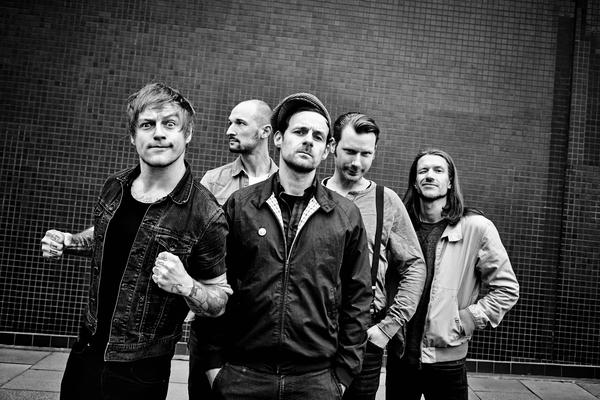 Stream DONOTS “I Will Deny” on New Noise Magazine

In preparation of the new release from DONOTS on Friday, March 4th, you can now stream “I Will Deny” on New Noise Magazine. The track is from the band’s forthcoming album ¡CARAJO!, which is currently available for pre-order on iTunes. Pre-order is available for a physical copy of the album in the OK!Good Records web-store. Head over to New Noise Magazine to stream “I Will Deny.”

Hailing from the small coalminers town of Ibbenbüren, Germany’s critically acclaimed punk rockers The Donots are without any doubt one of the longest running and hardest working bands out there. With a history of more than 20 years and their 1000th show on the horizon the energetic five piece (featuring the blood brothers Ingo and Guido Donot) has always managed to redefine and reinvent their sound while maintaining the characteristic trademarks that have found them thousands of fans around the globe.

Singalong punk and hardcore anthems, melancholic wave pop elements, uplifting bar brawl soundtracks, sweat, blood, spit and choruses catchy and contagious as the flu. Call it what you will: The transatlantic sound of The Donots and most importantly their live performances have the band travel for the better part of the year with countless tours throughout Europe, Japan and the United States, too. They have shared the stage with artists such as Green Day, Rise Against, Rancid, Flogging Molly, Die Toten Hosen, Bad Religion, NOFX and Iggy Pop.

The North American release of ¡CARAJO! will be available just in time for Donots’ upcoming appearance on Flogging Molly’s Salty Dog Cruise. Setting sails on St. Patrick’s Day Weekend, the sold out cruise to the Bahamas will feature Donots playing alongside Rancid, Frank Turner, The Slackers, Fishbone, Street Dogs and many more!

¡CARAJO! will be available digitally in North America on Friday, March 4, 2016 on iTunes, Amazon, and Google Play. The album will also be available for streaming on Spotify and Bandcamp.