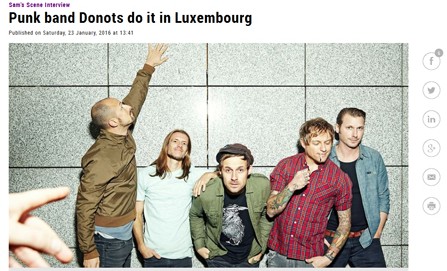 German punk band DONOTS is currently on their Karacho Tour and will be embarking on tour with Flogging Molly on the Salty Dog Cruise in March 2016. Donots has been featured in Sam’s Scene in the Luxemburger Post, where they discuss their lengthy career, recording in German, and much more. You can listen to the full podcast interview with Ingo from Donots below. Also, excerpts of the interview can be found below but be sure to head over to Luxemburger Post to read the full feature.

Listen to ACR Tour Tales below:

It’s been quite a journey for the band from Ibbenburen and the band recently started a new chapter in their story when they released Karacho, their first record entirely in German.

“Obviously that’s quite a big change for a band like us because we’ve been singing in English for more than two decades.” explained Ingo, “it’s a huge change but then it flows so naturally that it doesn’t feel like it. It’s new to me because I’m in charge of writing the lyrics and writing in German is definitely more of a challenge than writing in English because English just flows so well. German is a different story.”

It has worked out pretty well for Donots, Karacho has become their most successful album to date, reaching number five in the German charts and leading to their biggest headline shows ever.

Can’t get enough of Donots? Donots will be heading out on Flogging Molly’s ‘The Salty Dog Cruise,’ which will take place March 18-21, 2016 in celebration of St. Patrick’s Day.This will be a jammed packed music cruise with performances from Rancid, Frank Turner,The Slackers, and many more! Be sure to book your ticket while you still can! For more information head over to www.floggingmollycruise.com