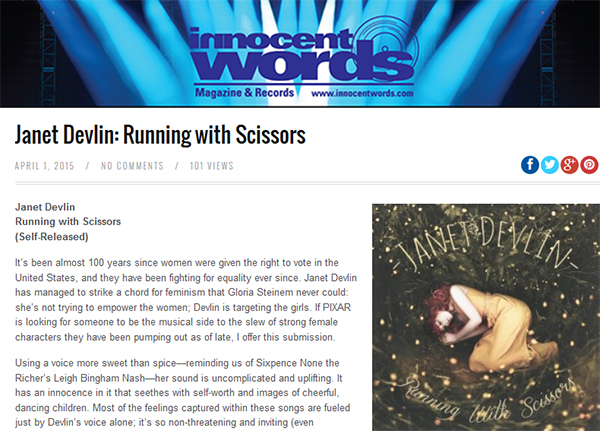 Singer-songwriter Janet Devlin‘s debut album Running With Scissors has just been reviewed by Innocent Words, who gave the album a rave review. The review portrays Janet has a strong female singer-songwriter who is improving women and girls everywhere. “Janet Devlin has managed to strike a chord for feminism that Gloria Steinem never could: she’s not trying to empower the women; Devlin is targeting the girls. If PIXAR is looking for someone to be the musical side to the slew of strong female characters they have been pumping out as of late, I offer this submission,” says Innocent Words.

The sounds exist in one stream, the words in another. It’s the idea of leather and lace that Stevie Nicks and Don Henley gave us so many years ago. From a point of vulnerability, she sings “I don’t need a lifeboat, I’m learning how to swim,” masking a gooey center of personal strength and defiance in a sweet-sounding musical candy shell. And it’s not all about proving one’s own fulfillment, but also the responsibility to call out those who hurt more than help: “Your words are like gasoline you throw on the fire.” This whole album is like listening to the tiny sparrow standing up to the hungry-eyed hawk. One can easily imagine a parent enjoying the appeal of the music to a daughter’s ears and the words to the daughter’s heart and mind; it’s cotton candy made of steel wool.

Innocent Words closed the review by stating, “These tracks prove that, though the delivery has a childish, Disney-quality, its essence is anything but. The whole piece offers a shot in the arm for anyone who needs a push in the Stuart Smalley direction—you’re good enough, you’re smart enough and doggone it, people like you!”

Janet’s debut album Running With Scissors is available now on our webstore, iTunes, Amazon, Google Play and at music retailers nationwide. The album is also available for streaming on Spotify and Bandcamp. Check out our exclusive Janet Devlin merchandise in our webstore.

You can read the full album review on InnocentWords.com