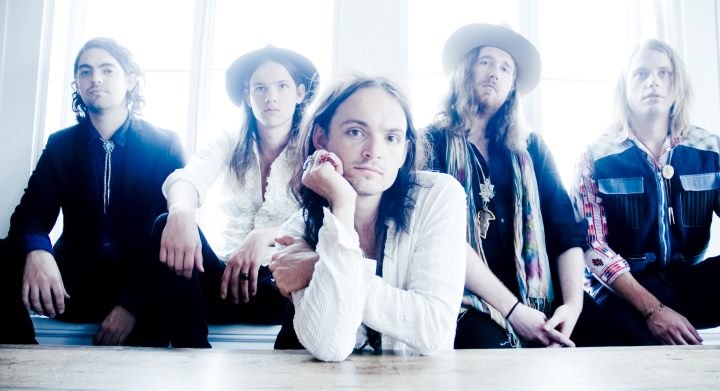 News publication, Dallas News did a really good feature about Dovetail this past weekend. With their debut album Mount Karma on the brink of re-release soon, Dallas News decided to publish an article about the band and their upcoming release Mount Karma. In the article, Lead singer Philip Creamer goes into details about winning the John Lennon Songwriting Contest, the release of their 7in vinyl, and the evolution of their sound on the bonus tracks included on the re-release of Mount Karma. You can find the original article here, or read the article below. Mount Karma will be release on OK! Good Records later this summer.

Philip Creamer knows John Lennon. Not personally, of course, but the Dovetail frontman certainly has a kinship with the late Beatles singer-songwriter.
He’s grateful for that connection. In January 2012 Creamer entered his Dallas band’s tune “Julie,” a cut from 2012’s debut full-length album Mount Karma, into the international John Lennon Songwriting Contest. By July “Julie” had snagged the grand prize in the rock category among the first batch of contestants. Six months later “Julie” took home the most fan votes when pitted against the winner of the second batch of rock-song entries.
That earned Dovetail’s “Julie” the coveted Lennon Award for rock song of the year. Creamer and his bandmates had already won $10,000 in gear and prizes. It also makes “Julie” a contender for song of the year, for which it will compete against 11 song winners in the other musical genres. The winner, to be announced in July, takes home $20,000 in cash.
“Entering the John Lennon Songwriting Contest is one of the many things we did as a band after the release of Mount Karma in an attempt to bring attention to the songs nontraditionally,” Creamer, 29, said in an email exchange. “I entered through Sonicbids.com. I only entered ‘Julie,’ though I struggled between different songs on the record.”
Creamer said he’s entered about six songs in various contests over the years. But this was the first victory.
“When I read the email and realized ‘Julie’ had won, I went upstairs, proceeded to find my brother and freak out just a little bit!”
Dovetail consists of Creamer and his brother Daniel, Aaron Haynes, Scott Lee, Tucker Cauble and Matthew McDonald. Record producer Beau Bedford occasionally performs in concert with the band.
The Lennon contest served as the catalyst for a slew of activity with Dovetail. The group signed a recording contract with New Jersey-based OK!Good Records. Mount Karma will be re-released by OK!Good, tentatively in August. It will give the record, which was independently put out by Dovetail, much-needed national distribution.
“I am very excited about the re-release of Mount Karma for many reasons,” said Creamer. “The first is that we get to release the album to a much greater audience this time around. It’s a definite milestone on our road. With so much out there, it takes a lot of help to cut through the noise. It’s nice knowing this record will be heard in many places across the world, and we feel it is a record people of all kinds can appreciate.”
Plus, the band’s show May 24 at the Foundry Bar in Dallas marks the limited-edition release of a 7-inch vinyl single featuring “Julie” backed with a new song, “Hey Hey Mama.” Both “Hey Hey Mama” and “Big City,” another fresh track, will be on the re-release of Mount Karma.
“Big City” and “Hey Hey Mama” capture a sharp evolution for Dovetail. The songs are still very much in keeping with the gauzy melodies, cascading keyboards and rhythm-intensive guitar riffs that characterize Dovetail, but there’s a slightly harder edge, a more pointedly precise sound.
“‘Big City’ and ‘Hey Hey Mama’ are certainly a continuation of our growth as a band,” said Creamer. “I think they reflect the place we are today, though we chose to record these two particular songs because they were written at the time of the bulk of Mount Karma and we wanted to continue the feeling of the time. I think the songs more accurately reflect our own musical preferences in the arrangement and sonic aspects, while allowing space for the increasingly lead role of piano and harmony.”
Lyrically speaking, the two songs evoke personal emotions for Creamer.
“‘Hey Hey Mama’ is a bit of an unintentional nod to our love of psychedelic rock and family-style harmony, maybe even some of the early ’70s country-rock we love so much. ‘Big City’ takes away the pain for me. It’s got a bit of that positive spirit I really believe in, you know, a bit of the belief that when we get away from all the business of life we can really experience beauty, and maybe even peace.”
Peace, now there’s a word connecting Creamer to John Lennon. That songwriting contest changed the course of Dovetail’s journey.
“After five years as a band, this is all definitely a welcomed shot in the arm. However, while we haven’t been performing locally as much lately, we have been traveling a lot, getting the record deal signed and revisiting the Mount Karma tracks for the re-release. We’ve been climbing the mountain, even if it’s often unseen.”
May 24 at 9 p.m. at the Foundry Bar, 2303 Pittman St., Dallas. Free admission. 214-749-1112.