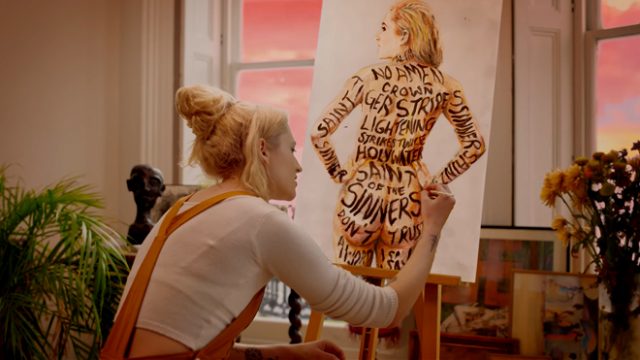 Janet Devlin’s premieres Music Video for her new single, “Saint of the Sinners”, on 1883 Magazine

Irish songstress, Janet Devlin, releases a poignant Music Video for her new single, “Saint of the Sinners”, which premiered on 1883 Magazine.

Irish songstress, Janet Devlin, releases a poignant Music Video, directed by Katia Ganfeld and shot by The Wood Brothers (Ivan and Timothy Wood), to accompany her new single, “Saint of the Sinners”. The music video, which premiered on 1883 Magazine on Nov. 14th, depicts Janet as a painter, who creates self-portraits that she associates with pain and regret, to detach herself from these moments.

Regarding the inspiration behind the video, Janet told 1883 Magazine that the video stemmed from her desire to paint over mistakes she made in the past.

“The video focuses on the duality of self and how future versions of ourselves often have to cover up and erase the mess of our past selves…All the paintings are self-portraits because although it sounds like there is a muse to the track, the person who I’m angry with is me….I’m painting myself and my past into these depictions, leaving me liberated to take control and move on.”

According to Janet, the paintings, which were painted by Conrad Armstrong and animated by Felix Geen, sing to the viewer to “[highlight] their confinement…[they are] versions of me which will no longer be free, but trapped on canvas”.

Janet’s new single, “Saint of the Sinners”, which was released on Nov. 1st on OK!Good Records, rides the waves made by September 2019’s ‘Confessional’, a track that announced her return to the music industry. Written with song-writing team Alkemi, and producer Jonathan Quarmby (Lewis Capaldi, Tom Walker) in the winter of 2016 when Janet was aged 21, “Saint Of The Sinners” is an expression of marching melancholy, revealing a past full of hurt, regret and the damaging and destructive perils of depression.

“Saint Of The Sinners” is her second single; the third track from her hotly-anticipated concept album Confessional, set for release in spring 2020.