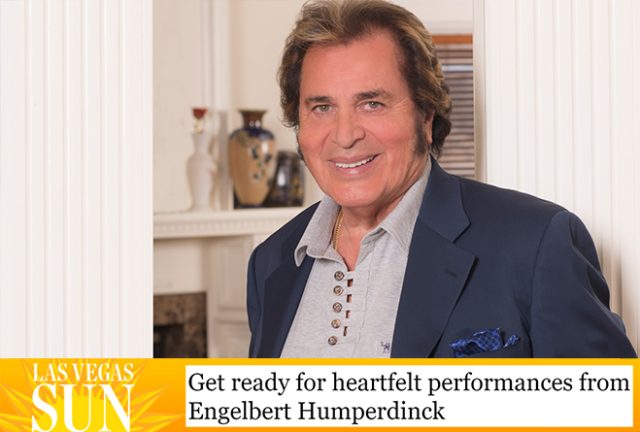 “The King of Romance,” Engelbert Humperdinck will be getting Las Vegas ready for Valentine’s Day this year with a pair of live shows this weekend at The Orleans Hotel & Casino. Currently on his Prodigal Son Tour the legendary singer will be performing on Saturday, February 10th and Sunday, February 11th.

Engelbert is touring in support of his latest album, ‘The Man I Want to Be‘ which he described to The Las Vegas Sun as, “one of the best albums I’ve ever made.”

“I’m especially proud of it because I normally do cover songs, and this album has seven brand-new songs. I’ve tested some of the songs on the album on the road and so far they’re all very well-received, especially ‘Just the Way You Are,’ which is Bruno Mars’ song that I’ve given with a new treatment.” – Engelbert Humperdinck

Las Vegas Sun writer, Brock Radke chatted with Engelbert about his upcoming weekend in a city that could be seen as his second home in the US.

Radke: You’ve been performing in Las Vegas since the late ’60s so you’ve seen a lot of change here over the years.

Humperdinck: I started in 1968 and it’s been a very eventful place for me, because I was taken there in the beginning. I was shown all the hotels to see which one I wanted to play, and I would up at the Riviera when Dean Martin was there [as an entertainer and with a minority ownership]. He took a big hand in it and I was the only one he did that for. I had a home in Las Vegas for about eight years, starting in 1978. It certainly has changed a lot because I remember a time when it took you five minutes to get across town. I also remember coming over for a month and doing 50 shows, two a night, and frequenting Lake Mead for waterskiing and playing a lot of golf.

Radke: You’ve been spending a little less time on the road so you can be at home with your wife more frequently. How has that affected your performances?

Humperdinck: I’ve decided to do about 80 concerts this year and I suppose that’s a bit of a different routine than what I normally would have done. There was a time I’d do 300 shows a year. But this takes me to all the parts of the world I need to be and I find it’s enough at this point.

My wife is doing fine. I’ve played the album for her and she recognizes my voice and these songs and looks at me a certain way sometimes and smiles and it’s wonderful to see. It does change how I perform because there are times I get a bit more emotional. Some of the lyrics mean more to me now, and it’s not that I haven’t been an emotional performer before because I do consider myself a thespian of music and try to interpret the songs in the most sincere way I can. But I do feel people understand and feel it in different ways.