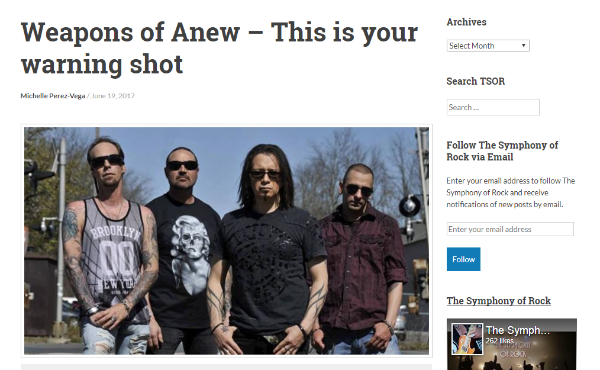 The Symphony of Rock Features Weapons of Anew

Musically, this north jersey quartet refuses to be “boxed in” or categorized. Their brash, bold, but melodic sound is colorful, layered and textured and they’re concerned with staying in the new. It began with former HavocHate and Axiom guitarist Freddy Ordine, who decided it was time to “concentrate on hooks.”

“I wanted to experiment with harmonies and melodies,” he explains. “I wanted to play music that came naturally to each member of this band. I wanted to work on songs and then immediately record them. I wanted to capture that spontaneity; that raw vibe; that fresh energy.”

After HavocHate grinded to a halt—the victim of internal strife and frequent lineup changes—Ordine found himself at a crossroads. Yes, he now had time to focus on his growing family, but he was not done with music. So, while contemplating his “next musical move,” he decided it was time to seek out a new “musical partner in crime,” a vocalist who could help bring the musical ideas to life. He found exactly what he was looking for when he was introduced to former Spread Eagle singer Ray West. Known for his raspy, melodic, soulful and psychotic vocals, West was a recording veteran, whose former band was signed to MCA records. When Ordine and West first connected, it felt as if the two had been lifelong friends.

As for the bands’ rhythm section, the guitarist reached out to HavocHate’s former touring bassist Stefan “Reno” Cutrupi, who Ordine admits to “wanting to collaborate with since first meeting him in ’05.” The guitarist beams. “Reno has a very unique approach to his instrument. The way he stacks parts on top of mine and creates layers is simply amazing to watch. “Chris [Manfre] has all the elements a great rock drummer should have: energy, drive and the ability to hit hard. I knew the second I saw him play that he was special and meant for this project.”

Regardless, the most talented artists need a little luck or face being the proverbial “tree in the woods” and never being heard. Weapons of Anew’s break came late last December when they were invited to open “The Last Hero” tour, which featured Alter Bridge and Nonpoint. While many acts opening for artists as popular as Alter Bridge and Nonpoint collapse under the immense pressure, Weapons of Anew flourished, feeding off of each capacity crowd’s energy while growing their following. They received constant critical acclaim, unusual for a band performing their first live shows.

Yes, the band performed like season professionals throughout the tour—despite being new to the stage and having yet to release their debut full-length. All that anyone in the crowds could get their hands on was the band’s debut single “Killshot.” A fatal mistake for most band’s opening major tour, but not Weapons of Anew. The band quickly realized the stage was their home and didn’t require time to jell or find their live “live footing.” The months toiling away in their private rehearsal space and recording studio had certainly prepared Weapons of Anew for what awaited them.

Musicianship coupled with powerful, charismatic vocals are important, but even the most talented artists would stumble without creative, catchy songs. And, as “The Last Hero” tour audiences will attest, each of the band’s songs resonate. From their set opener “Brave” to their debut’s closing track—the inevitable radio hit–“Undone,” Weapons of Anew never relented.

Weapons of Anew’s debut, which the band may or may not title “The Collision of Love and Hate” (they may just leave it “self-titled”)—was produced by the band James Murphy (ex-Death, Testament and Cancer). Although notoriously authoritative, Murphy collaborated with the band as if he was an additional member, offering and receiving ideas to make the source material stronger. The end results were mixed by Mike Ferretti (Sevendust and Warren Haynes, among others), who was able to capture the band’s organic, live sound while staying away from pro-tools- or auto-tune-embellishing.

Weapon of Anew’s debut single “Killshot” is available via for digital purchase on iTunes, Bandcamp and the OK!Good Shop. The track is also streaming on Spotify and SoundCloud.

For more from The Symphony of Rock, visit: https://thesymphonyofrock.com/2017/06/19/weapons-of-anew-this-is-your-warning-shot/