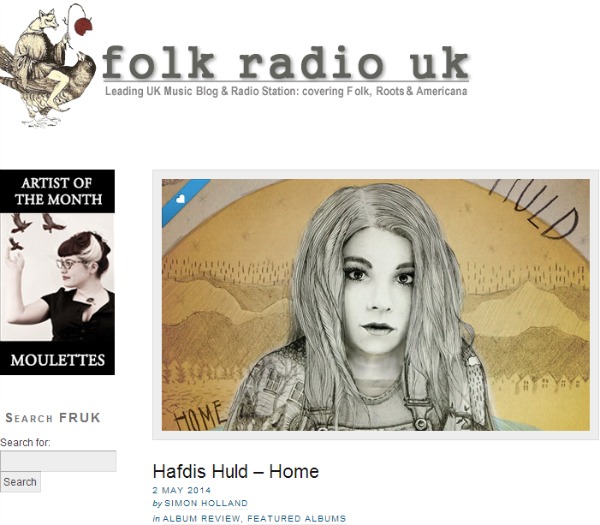 Sending over a HUGE thank you to Folk Radio UK for not only previously posting “Queen Bee” as their “Song of the Day,” but for making Hafdis Huld’s “Home” their Album of the Month AND providing an extensive review of the record:

“Just over a month ago, we presented you with Hafdis Huld’s Queen Bee as our song of the day. Accompanying the post and the wonderful animated video for the song was a further video, in which she talked briefly about the making of her new album and offered a track by track run through. Significantly at the start of the video she talked about starting to make the record in London. Working with Ed Harcourt on material, the pair had managed to create a bright, sparkling pop song, which she describes as sounding like a party was starting up, before adding it just wasn’t a party that she wanted to be at.

It wasn’t all in vain, however, but with minimal time left to salvage the session, Hafdis and Ed sat down with just an acoustic guitar and wrote the basics of Sunrise the song that opens the album. In doing so Hafdis rediscovered her creative spark and between them they had set the template for what would become Home. The result of calming things down, is a beautifully serene set of songs, that benefit greatly from a stripped back and mostly acoustic production. Naturally enough, given the title, everything was recorded at home with her musical and life partner Alisdair Wright.

Given the circumstances of her life, the decision makes a lot of sense. The last couple of years have been comparatively quiet as Hafdis and Alisdair have a new family with the birth of a daughter. Discovering that she was pregnant while on tour, the uncomfortable mix of travelling and performing while expecting, quickly established the priorities. But while taking a break, Vogguvisur, an album of lullabies sung in Icelandic, served to satisfy her craving for time in the studio making music.”

You can read the full review here, and get your copy of Hafdis Huld’s “Home” here!