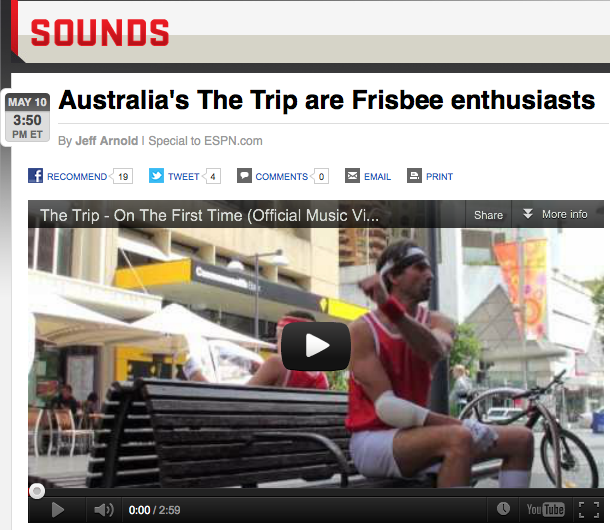 Our very own Australian frisbee enthusiasts, The Trip, were recently interviewed by ESPN.com for their music blog, Sounds! Read what the guys had to say about their love of all things frisbee, the making of their video for “On The First Time,” and plans for a second video (that might involve some daring table tennis stunts!) below:

“Australia’s The Trip are Frisbee enthusiasts
So you’re an up-and-coming alternative/pop rock band looking to make a memorable music video on a bare-bones budget.

So you do what comes natural.

You turn to Frisbee.

That only makes sense, right?

For The Trip, an Australian trio that often draws comparisons to early-generation Red Hot Chili Peppers or Maroon 5, hitting the streets of Sydney armed with nothing more than a film crew and a collection of competition-style Frisbees proved to be the ticket.

Not only to create a unique music-video experience but to introduce themselves to a new North American market the band hopes to thrive in for years to come.

Three bandmates, dressed in full competitive Frisbee uniforms, pull off one disc trick after another, showcasing skills in “On The First Time,” hoping either to take the next step in their musical journey or to move closer to what vocalist/guitarist Marco Yellin insists is The Trip’s true calling.

‘We actually just do music on the side until our professional Frisbee careers take off,’ Yellin says, perhaps only half-joking. ‘They say it takes a good 10-15 years of really paying your dues on the Frisbee circuit before you can see any real money.’

The Trip has been paying its dues since 2010 when the band officially formed after nearly 10 years of Yellin, Chad Kendrick (guitars and vocals) and Wes Roy (drums and vocals) playing together in other bands in Australia.

After self-funding a trip to the States to work on their first record, The Trip returned to Australia, rerecorded 11 tracks for their debut album — released in 2011 — and set in motion a journey that brought them back to North America.

But not before using their Frisbee skills on a video that’s part music and part audition tape for the professional Frisbee leagues Yellin not so secretly yearns to become a part of.

The concept to build a video around Frisbee, however, wasn’t as inspired as the final product suggests. Frisbee had always been more of a hobby, a means to break up long bus tours circumnavigating Australia.

The early Frisbee days had brought varying levels of success, bottoming out while The Trip played in an alley off Melrose Avenue and one toss got away, hitting Soundgarden frontman Chris Cornell in the head during a photo shoot.

‘He was actually pretty cool about it — he said we’d never work in this town again,’ Yellin said. ‘It was kind of a cool start to our Frisbee career.’

Building off of concepts used in Ultimate Frisbee and Frisbee Golf, video producer Nick Livingston suggested creating a new style of Frisbee — an improvisational street freestyle genre — that became the foundation for the “On The First Time” video.

‘It was meant to be,’ the Canadian-born Kendrick said. ‘It just started clicking right away — it was like,‘Oh my God, I don’t know if anyone has ever done this before.’

Between hitting skate parks and beaches — and being chased out of a shopping center by mall security after pulling off a 400-yard shot, with Frisbees flying between two escalators at opposite ends of the mall — the project come together.

Some of the tricks were captured in one take. Others — including flying a disc through a moving car — took more painstaking effort.

‘We had no idea how it was going to turn out, but we knew if we had a good time doing it and no one got too badly injured, we’d be OK,’ Yellin said.

‘At the end of the day, our band is out to not take ourselves too seriously. We want to make some good songs and entertain some people.’

The record represents the band’s first foray into the North American market; its previous album was released only in Australia. Yellin jokes about the fact that he and his mates have taken to exotic dancing, ‘fighting against strong, good-looking guys’ to help pay the bills until they make it big — either as musicians or on the pro Frisbee circuit.

While Yellin hopes to attract new listeners with the band’s eclectic sound, he isn’t above turning back to Frisbee — or other sports — to integrate into future videos.

As it turns out, The Trip also has a fascination with table tennis that could possibly provide the basis for another low-budget video built around the band’s athletic endeavors.

‘We either do that or go to some karate training class and learn some amazing moves and up it by about 10 levels,’ Kendrick said. ‘So I’m happy to continue on with the social games and beer-drinking games and see what comes next.'”

Don’t forget to pick up your copy of The Trip’s debut self-titled album, out now on OK!Good Records!