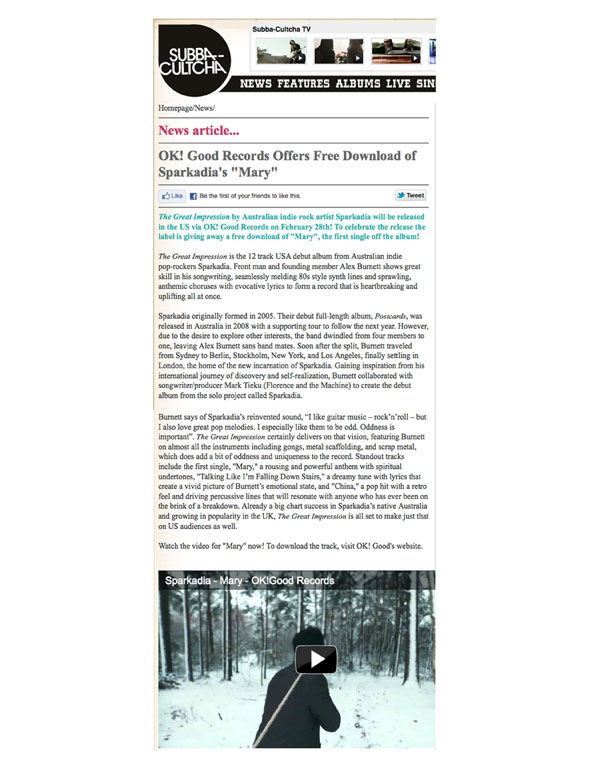 “The Great Impression by Australian indie rock artist Sparkadia will be released in the US via OK! Good Records on February 28th! To celebrate the release the label is giving away a free download of “Mary”, the first single off the album!

The Great Impression is the 12 track USA debut album from Australian indie pop-rockers Sparkadia. Front man and founding member Alex Burnett shows great skill in his songwriting, seamlessly melding 80s style synth lines and sprawling, anthemic choruses with evocative lyrics to form a record that is heartbreaking and uplifting all at once.

Sparkadia originally formed in 2005. Their debut full-length album, Postcards, was released in Australia in 2008 with a supporting tour to follow the next year. However, due to the desire to explore other interests, the band dwindled from four members to one, leaving Alex Burnett sans band mates. Soon after the split, Burnett traveled from Sydney to Berlin, Stockholm, New York, and Los Angeles, finally settling in London, the home of the new incarnation of Sparkadia. Gaining inspiration from his international journey of discovery and self-realization, Burnett collaborated with songwriter/producer Mark Tieku (Florence and the Machine) to create the debut album from the solo project called Sparkadia.

Burnett says of Sparkadia’s reinvented sound, “I like guitar music – rock’n’roll – but I also love great pop melodies. I especially like them to be odd. Oddness is important”. The Great Impression certainly delivers on that vision, featuring Burnett on almost all the instruments including gongs, metal scaffolding, and scrap metal, which does add a bit of oddness and uniqueness to the record. Standout tracks include the first single, “Mary,” a rousing and powerful anthem with spiritual undertones, “Talking Like I’m Falling Down Stairs,” a dreamy tune with lyrics that create a vivid picture of Burnett’s emotional state, and “China,” a pop hit with a retro feel and driving percussive lines that will resonate with anyone who has ever been on the brink of a breakdown. Already a big chart success in Sparkadia’s native Australia and growing in popularity in the UK, The Great Impression is all set to make just that on US audiences as well.

Check out the original post and video at Subba Cultcha.

Sparkadia’s The Great Impression will be out on February 28th, but you check it out now on our website: http://okgoodrecords.com/blog/2011/10/18/sparkadia-the-great-impression/