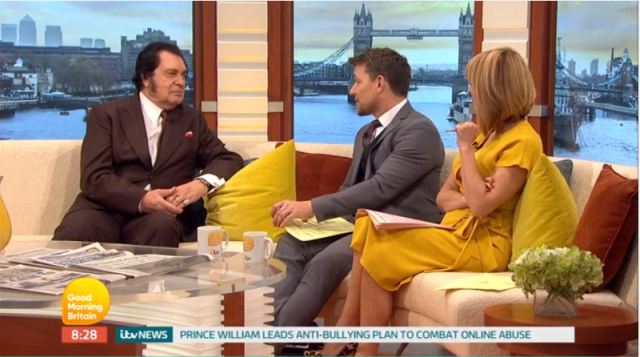 Engelbert Humperdinck stopped by the set of Good Morning Britain for a pleasant interview before his concert at London’s Theatre Royal. Good Morning hosts were surprised to hear that 1966 smash-hit “Release Me” kept “the mighty Beatles” from having their 13th #1 hit with “Penny Lane” / “Strawberry Fields”, a double sided single. “Release Me” was number one on the charts for 6 weeks and remained there for 56 more.

“That was the fortunate song of mine that not only stopped them from having their 13th one, but made my career.”

The interview switches focus to Engelbert’s upcoming release of album The Man I Want To Be. Engelbert boasts the talents of his granddaughter Olivia who is featured in the only duet of the album “I’m Glad I Danced With You”. The track is a true family affair; the lyrics were written by his daughter Louise Dorsey and the music was composed by Olivia’s father Tony Toliver.

“No one has had a duet with a nine year old before, and I’m so thrilled. She’s such a great singer.”

Interestingly enough audiences also learned that Engelbert met a 5-year old Bruno Mars at one of his fan club meetings in the early 90s. Bruno was the entertainment for the evening, he was dressed in a little sparkling suit and sang and danced a miniature Elvis routine. That interaction was among many of the reasons why Engelbert decided to feature a melodic rendition of “Just the Way You Are” on The Man I Want To Be.

“Young man you’re going to be a big star, but he’s not a big star he’s a megastar!”

Fans can join us for a full preview of The Man I Want To Be by subscribing to the OK!Good Records YouTube Channel. The exclusive live-stream will take place on Wednesday, November 22nd at 4:00 PM EST/8:00 PM GMT. Tune in to hear Engelbert’s commentary on each track, as well as a chance to win a limited edition signed copy of The Man I Want To Be. In addition we will be releasing a nostalgic article of Engelbert merchandise that we might just give away too!

The Man I Want To Be will be released by OK!Good Records on Friday, November 24th. Pre-order a copy at the OK!Good Store here, or on Amazon here. Tickets are available to his show at London’s Theatre Royal on Drury Lane but are selling fast. Get one before they sell-out here.

The Man I Want To Be