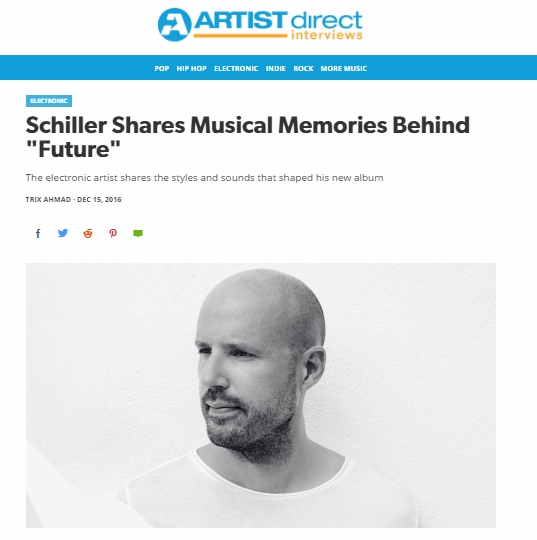 Critically-acclaimed electronic-pop artist Schiller, released his new album Future on December 16th. This marks the ninth studio album from the multi-Gold and Platinum-certified composer. Schiller recently spoke with ARTISTdirect about his musical memories, and runs down some tunes that have contributed to his creative sensibility and to the shape of his latest album. Check out some of the feature below, but head over to artistdirectinterviews.com for more.

I got totally hypnotized by “Moments In Love” by Art of Noise. That minimalistic synth-sequence running for ten minutes is pure genius, even by today’s standards. Got the 12” maxi–single and I am sure eventually my neighbours knew every not of that track.

Kraftwerk! I saw them on their “The Mix” tour and was simply blown away. It must have been in the mid nineties in Hamburg. Those four electronica–pioneers performing their artful electronica–essence were utterly inspiring to watch and listen to.

First song I learned to play…

When I was 6 years old my grandfather gave me a piano and I had to go through those inevitable piano–lessons. I cannot recall those classical tunes I had to learn, but I do recall a beautiful piece by Elton John “Song For Guy”. I think it is the only instrumental piece of him. Still love it today. Am not sure If i am still able to play it though.