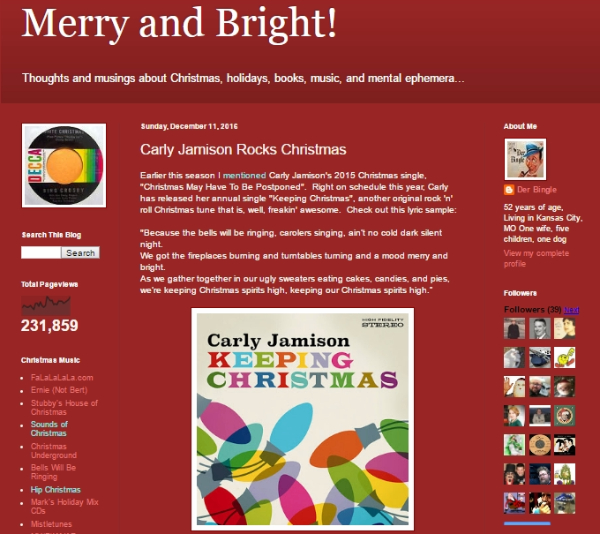 New York based singer-songwriter Carly Jamison has been featured on Merry and Bright, a blog where Christmas connoisseur Der Bingle shares his thoughts about Christmas, holidays, books, music, and more! Merry and Bright has featured Jamison’s new holiday single “Keeping Christmas,” which was released last month. Check out the feature below, but be sure to visit Merry and Bright for more!

“Earlier this season I mentioned Carly Jamison’s 2015 Christmas single, “Christmas May Have To Be Postponed”. Right on schedule this year, Carly has released her annual single “Keeping Christmas”, another original rock ‘n’ roll Christmas tune that is, well, freakin’ awesome. Check out this lyric sample:

To me, based on listening to thousands of original Christmas songs, the hardest thing for a Christmas songwriter is to channel the traditional icons and imagery of Christmas into a song without sounding trite and cliche. Please songwriters, don’t rhyme “snow in the city” and “lights are pretty” ever again. So, look at Carly’s lyrics again. Traditional stuff – bells, carolers, ‘silent night’, fireplaces, cakes. But there isn’t a hint of cliche in this song. It’s sooooo fresh in lyric and sound. Dang, I love it. If I had a rating scale it would get the top rating. Five Fruitcakes. Five Snowflakes. Five Sleigh Bells. All on of a scale of one to five.

But here’s the best part, and what I really wanted to write about. “Keeping Christmas” is Carly’s sixth Christmas single. After hearing “Christmas May Have To Be Postponed” I bought the rest of her Christmas catalog (5 at the time) and then promptly added “Keeping Christmas” when it was released. I love every single one – they all pass the ‘no cliches’ test, they all rock your Christmas Bells off, and they are all as original as they come.

To read more from Merry and Bright visit: http://merryandbright.blogspot.com/2016/12/carly-jamison-rocks-christmas.html

You can purchase Carly Jamison’s new single “Keeping Christmas” on Amazon, Bandcamp, and iTunes. Stream the single on SoundCloud and Spotify.
For more info visit http://www.carlyjamison.com