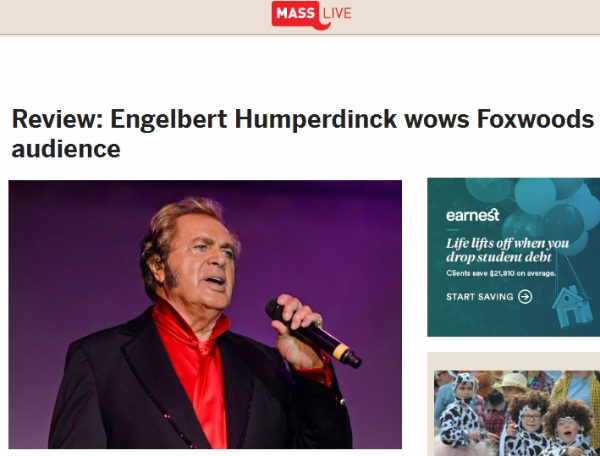 International music legend Engelbert Humperdinck wowed his crowd this past Sunday night at Foxwoods Resort and Casino. The King of Romance was showered with applause and praise at the Fox Theater. In attendance was Mass Live, who gave a rave review of Humperdinck’s performance. You can read some of the review below, but be sure to head over to MassLive.com to read the full review.

Humperdinck began the show with “That’s Life” and sang a number of crowd pleasers including “After the Lovin’,” “Am I That Easy To Forget,” “A Man Without Love,” the lively “Quando, Quando, Quando,” “The Last Waltz” and a rendition of “Bridge Over Troubled Waters” by Simon and Garfunkel, which brought the audience to its feet.

Telling the crowd proudly that he has 81 albums to his name, Humperdinck sang two songs from his latest albums. From “Engelbert Calling,” an album of duets with Olivia Newton-John, Kenny Rogers and many others that was released in 2014, he sang “Something About the Way You Look Tonight” along with a recording of Elton John providing the duet. And from his country album, he sang a song penned by Boz Scaggs entitled “Look What You’ve Done To Me.”

Nearer to the end of the show, Humperdinck told his audience that “no show would be complete without a medley of songs that made it possible for me to be here tonight.” He then launched into a string of hits including “Les Bicyclettes De Belsize,” “There Goes My Everything,” “Spanish Eyes,” and “Release Me,” which reached number one on the UK Singles Charts, holding the top spot for six weeks during March and April 1967 and keeping The Beatles’ “Penny Lane”/”Strawberry Fields Forever” from earning them another number one hit.

There was no shortage of audience banter and Humperdinck told many stories between songs, even making reference to the elections saying, “I should run as a third party candidate and call myself Trumperdinck.” Later, he appeared about to take a sip from what looked like a glass of wine. “There is no alcohol in this glass. Twenty-one years no alcohol, but like Hilary, I also lie,” he laughed along with the audience. At another point in the show, he talked about becoming good friends with the late Dean Martin, who took the entertainer under his wing, and showed a clip of them singing together on Martin’s television show.

Before the show ended, Humperdinck thanked those in the sold-out theater telling them, “Applause is the food of artists. Thank you for not starving me.”

Find a tour date near you at engelbert.com/tour