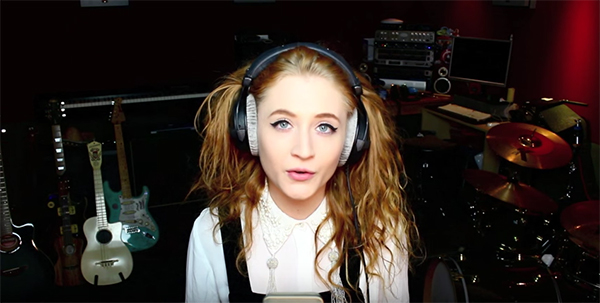 Singer-Songwriter Janet Devlin had an exclusive interview with GIGsoup last week discussing everything from touring, a new album, and staring in an upcoming independent film. Her excitement emanates as she gets ready to share her new material on tour in a few months. Check it out bellow:

“I’m excited and nervous,” the ‘House of Cards’ singer told GIGSoup’s Bradd Chambers, “I always get nervous before tours. Every time I think about the tour I’m always feeling like ‘oh gosh what if no one buys a ticket’ and ‘what if no one shows up’ and I’m there performing to a room of like four people. So it does make me scared. But I always love it when I’m actually on the road, just the run up to tour is always the scariest part for me.”

So what can we expect on this tour? Devlin promises an exciting time. “New music, lots of new music. Some new musicians as well, a different band. Songs from the Christmas EP, my old album and a few covers too. It’s always good fun. Everyone that goes enjoys themselves.”

It’s been two years since Devlin’s latest album, a long time for a girl just coming out of adolescence, and it seems as Devlin grows, her music does too.

With so much to look forward to, we share in her excitement as we get ready for Janet’s next big step.

Keep an eye out for Janet’s new single ‘Outernet Song’, which will be available for digital and physical purchase, as well as streaming on Friday, October 7th. Pre-orders are available now on iTunes and at http://www.janetdevlin.com/store/

And make sure you check out the rest of the interview at: GIGsoup.co.uk