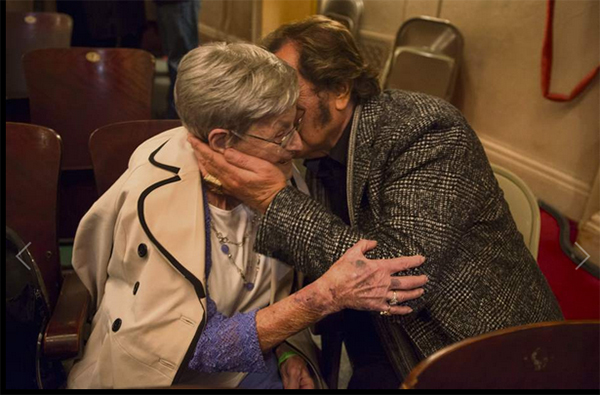 This is the second time in a week Dorothy has seen him perform. The first was April 9, her birthday, in Atlantic City. She doesn’t know how many of his concerts she has seen — at least 30, she says. She and her daughter, Carol Bykowski, travel at least once a year to see him.

It’s not easy. She has to schedule her dialysis around the shows. But it’s worth it, Dorothy says. “He has a great voice,” Dorothy says. “Oh, he’s always good.”

The shoe ends. Half an hour later, the theater is nearly empty. Dorothy and Carol sit near a side exit, waiting for traffic outside to ease. Dorothy is getting tired. She pulls her daughter’s coat over her shoulders.Then, 15 feet away, a door leading backstage swings open.And the man once known as Gerry Dorsey steps through it.

Dorothy’s jaw drops. She is a little girl again.

“Hello, sweetheart,” he says. She tries to stand. He insists she sit. He pulls up a chair and settles in, because this isn’t an impersonal, 30-second meet-and-greet. Engelbert Humperdinck wants to talk to Dorothy Clemens, the woman who has followed him to Florida, Nevada, Ohio, West Virginia and New Jersey.

She tells him that she saw him in Atlantic City four days before.“I’m flattered,” Humperdinck says. “Happy belated birthday, my darling.”They talk about old age. “What’s the problem?” Humperdinck says. “You can’t avoid it. And you’re lucky to get there. A lot of people don’t.” He describes to her the thrill of performing, as strong as ever, how he is “reborn” the moment he grabs the mic.She doesn’t need to tell him how she feels when he sings.He kisses her. Then, he leaves.Now, it’s late. Time to go home.

Mother and daughter walk slowly to their car. As they drive down Eighth Avenue toward the Homestead Grays Bridge, Dorothy turns to Carol. “I can’t believe I actually met Engelbert,” she says. “I can’t wait to tell the nurses at dialysis tomorrow.”