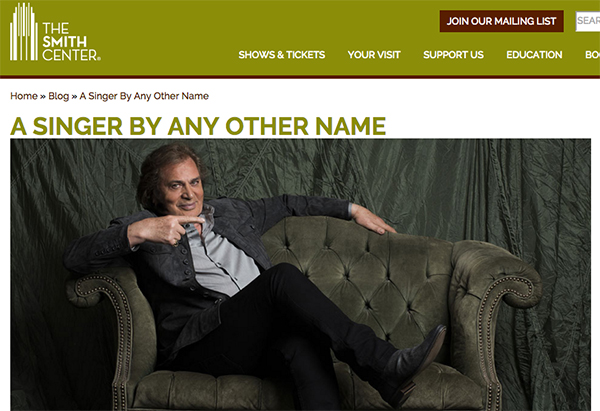 Engelbert Humperdinck Featured on The Smith Center: A Singer By Another Name

International music legend Engelbert Humperdinck will be performing at The Smith Center in Las Vegas on March 19th as a part of his 2016 Tour. In preparation of the upcoming performance, Humperdinck has been featured on The Smith Center’s website where they discuss his unique name and lengthy career. You can read some of the feature below, but be sure to head over to TheSmithCenter.com to read the full article.

Arnold George Dorsey is more generally known by his internationally-recognized moniker: Engelbert Humperdinck. But, to paraphrase Shakespeare, a singer by any other name would sing as sweet.

While touring in England, Dorsey had to contend with a serious bout of tuberculosis and was off the stage for six months. When he recovered, it was time for a new image to showcase his health and vitality, so it was time for the next name change. His manager suggested Engelbert Humperdinck, from the 19th century Austrian composer who wrote “Hansel & Gretel.” Not a common name, but one that would grow in popularity as the singer rose to global fame.

That fame endures as Humperdinck’s hits endure, including “(Please) Release Me,” “After The Lovin’,” “Spanish Eyes,” “The Last Waltz,” “Can’t Take My Eyes Off You” and “Quando, Quando, Quando.”

It’s a funny thing about names. Famous singers are sometimes known by their first names – Madonna, Dion, Cher – but this performer proves that talent is the key to success, whether the name is Arnold George Dorsey, Gerry Dorsey, or Engelbert Humperdink.

Click here to read more from The Smith Center

To purchase tickets for Humperdinck’s performance at The Smith Center click HERE.