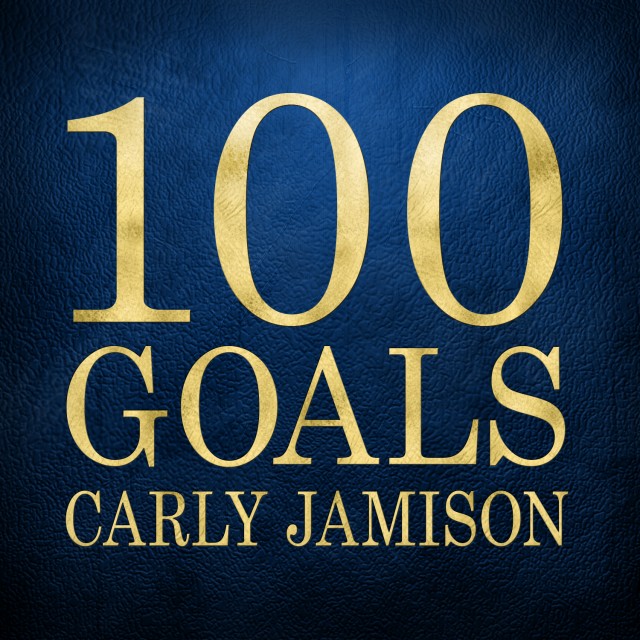 Songwriter and recording artist Carly Jamison has announced the release of her next single, “100 Goals”, on January 15, 2016. A new original song in the vintage style of classic rock and roll, it celebrates a new year, new beginnings, and the use of planning, list making, and visualization to define and achieve goals.

“I literally had sat down and made a list of 100 goals not long before I wrote this song.” says Jamison. “It took me 4 hours but it was worth every minute. It gives you kind of a road map for the new year. One of my goals was to schedule more songwriting sessions instead of just writing randomly when inspiration struck. This song was the result of some of those first few sessions so I can tell you that writing down a list of goals does help you achieve them. It even helps you write songs.”

“100 Goals” was recorded in the Nashville area at The Sound Shelter studio in Franklin, TN and was produced by Tres Sasser, who produced all of Carly’s previous recordings as well. When asked about the release, he stated, “The New Year certainly brings about excitements and challenges and this song addresses them head on. The opening note of the fuzz wa-wa guitar lets you know you’re going on a musical journey. Then you hear Carly’s voice. She knows what she’s singing about! The band comes in low with tons of attitude and guitarist Chris Tench leading the way. When the chorus hits, you are engrossed in the song and begin to shout along with the chorus – “I see some big plans on the horizon”… The band is excellent on this and really gets the mood of the song across to the listener. It’s a song of ideas, its a song of triumph and its a song of “let’s do this thing.” I wish we had more artists putting out this kind of message today. It’s cool that Carly can take a simple idea and make it so profound and rockin’.”

Players on the project include Chris Tench on guitars, Tres Sasser on bass, Elton Charles on drums and percussion, and Mike Webb on keyboards. It was engineered by Brett Ryan Stewart and mixed by Joe Costa (known for his work with Ben Folds, Ke$ha, and Brad Paisley) at The Sound Shelter. It was mastered by Pete Lyman at Infrasonic Mastering who is known for his work with Jason Isbell, Courtney Love, Fall Out Boy, Sturgill Simpson, and many others.

Released by OK!Good Records, founder Jurgen Korduletsch states, “We’re hoping to build on the momentum following Carly’s Christmas release with a new single for the new year. This is an artist who is creating timeless music which is sure will have perennial appeal for years to come.”

Visit http://www.carlyjamison.com for more information and to preview the release.