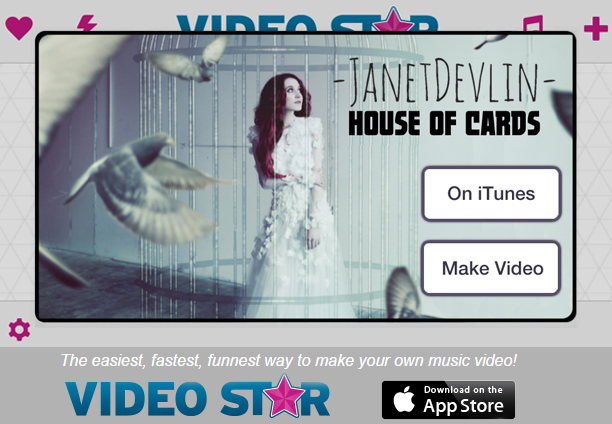 Janet Devlin’s “House of Cards” has been featured as the free ‘Song of the Week’ on the popular music video app, Video Star. This will be Janet’s third feature on the app, with her previous songs, “Creatures of the Night” and “Wonderful” generating thousands of user-created music videos uploaded to YouTube.

Video Star is a music video creator available for free in the Apple App Store. The app allows allows kids and teens to star in their own music videos by selecting from hundreds of built-in effects, turning their iPhone, iPad or iPod Touch into a full editing suite. Simply download the app, select the song by clicking the featured “music note,” and dance and lip-sync away! The app allows for instant sharing to your camera roll, YouTube or Facebook, so be sure to send or tag us in your music video creations. Visit Video Star App here: VideoStarApp.com

“House of Cards” can be found on Janet’s debut album, Running With Scissors, available now on our webstore, iTunes, Amazon, Google Play and at music retailers nationwide. Be sure to check out all of our exclusive Janet Devlin merchandise in our webstore.