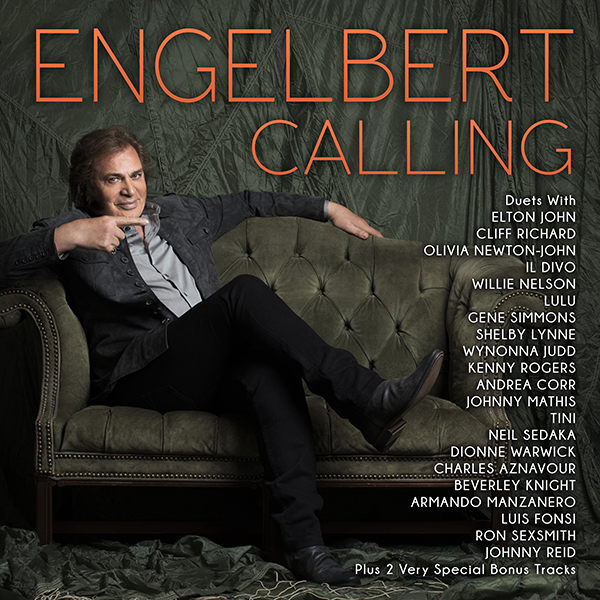 Legendary music artist Engelbert Humperdinck proudly announced today that his highly anticipated new album “Engelbert Calling” is set to release in the US and Canada on September 30th and will feature duets with some of the world’s most recognized names in music, including Elton John, Willie Nelson, Olivia Newton-John, Gene Simmons, and more. Fans will be able to purchase “Engelbert Calling” on iTunes and at all major music retailers across North America.

The album, which will be released by OK!Good Records, was produced by Grammy Award-winner Martin Terefe, who is well-known for his work with Jason Mraz, James Morrison, KT Tunstall, and Mary J Blige. “Working with Engelbert is such a truly remarkable experience,” Terefe stated when asked about his work with Engelbert. “He is without doubt one of the best singers around today and brings so much other musical knowledge to the table.”

After being released in May in the UK, Australia and New Zealand, “Engelbert Calling” wowed music fans as it jumped to the top of the top of the international music charts and continues to soar in record sales. As Engelbert has been hard at work in the studio creating these tracks with friends and some of music’s most influential artists, North American fans can look forward to a slew of great new songs.

“He is one of the sweetest and nicest people I have ever worked with,” Elton John said about his experience collaborating with Engelbert. “We had a great time singing together and he is so quick, what I call a ‘one-take singer,’ 76 years old and still sounding as good as ever!”

“Seeing the success this album has had overseas has made me even more excited to release it to the US and Canadian fans,” Engelbert said about the album. “I am grateful to have had the opportunity to partner up with some of the best artists in the history of music. To continue putting out successful albums after 45 years in the business is a real testament to the loyalty of my great fans and this album is a ‘thank you’ to all of them.”

More than 45 years after his massive hit “Release Me” reached #1 on the pop charts and created a worldwide frenzy, spending six full weeks at #1 and an incredible 56 weeks in the Top 50 in a single chart run, Engelbert’s newest album comes as a celebration of his remarkable career which has spanned nearly five decades. After selling more than 150 million albums world-wide, including 24 certified with platinum status and 63 with gold, Engelbert has solidified his name as an international pop legend and has established himself as one of the world’s most influential artists.

This summer Engelbert will be giving fans even more to be excited about, as he hits theaters and arenas across North America, playing tracks from the new album. Tour dates and more information can be found here, http://www.engelbert.com/tour.

For more information and future performance dates for Engelbert Humperdink, please visit http://www.engelbert.com/ and stay up-to-date on his current projects by following him on Facebook https://www.facebook.com/OfficialEngelbertHumperdinck; Twitter https://twitter.com/ehumperdinck; and YouTube http://www.youtube.com/user/TheENGELBERTChannel.

About OK!Good Records:
OK!Good Records is a genre independent record label established in 2010 to distribute, market, and promote artists and music that defy boundaries, reject limitations, and transcend the ordinary. They champion and celebrate independent music, thought, art, expression, and enterprise.
http://www.okgoodrecords.com