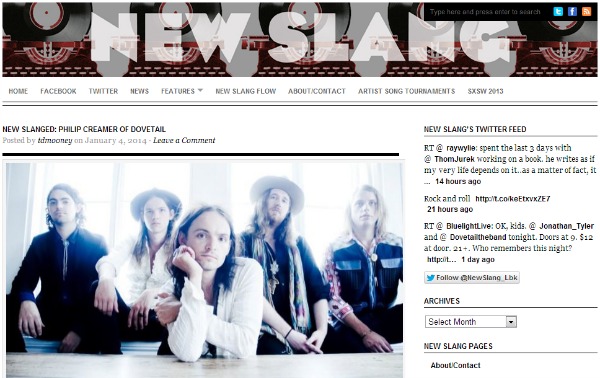 “Saying that Dallas-based rock band Dovetail is a throwback rock band from the ’60s or ’70s is kind of a slight knock to both the band and music that from then. They aren’t a cover band or something.

Dovetail isn’t here to overindulge us with sounds of cheapened nostalgic pleasure. In saying that, I’m not so naive to think Philip and Daniel Creamer would have arrived with this specific sound without the guidance of a few notable music figures.

I guess what I’m saying is that while the harmonies remind us of The Beatles and The Beach Boys, their arrangements can spark images of Queen, and there are hints of T. Rex glam and Laurel Canyon folk, and songwriting they’re not just cherry-picking the great qualities of all these bands to create their sound without any reference or reason. The rock and roll experience isn’t one old enough to think Dovetail (and most rock bands for that matter) aren’t feeling the same way about things bands from the ’60s and ’70s were.

After hearing their 2013 major label debut Mount Karma, you know Dovetail isn’t in the business of trying to recreate what the elder statesmen of rock did. If that was the case, they’d have just recorded Magical Mystery Pet Sounds or something to that effect. What’s the fun in that?

Throughout, they show their range jumping from legitimate rock ramblers like “Hurricane,” Wilcoesque folk ballads like “Big City,” the simple stripped down “Can’t Feel You,’ and the elegantly building magnum opus title track “Mount Karma.” Though it isn’t drastically longer than any other track, “Mount Karma” feels like a grandiose crescendo with varying smaller pieces that create the larger whole. It’s really a microcosm for the entire record.”

You can check out the interview here, and be sure to download your copy of “Mount Karma” here!