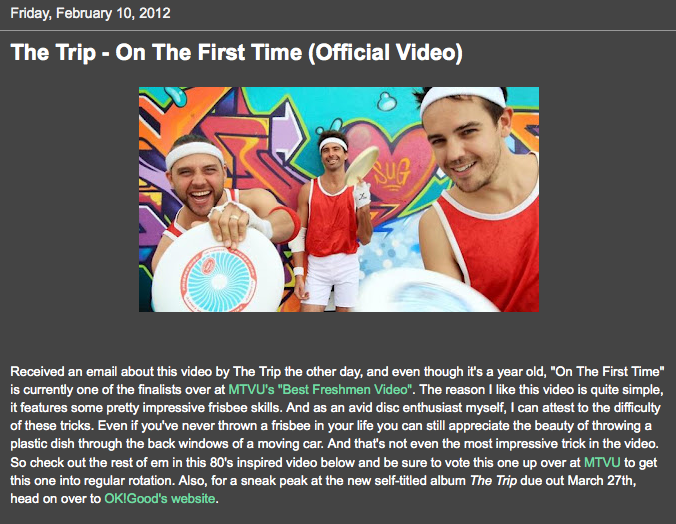 Music That’s Nu2Me, a new music blog focused on promoting music outside of the mainstream, featured The Trip’s video for “On The First Time” on their site last week. Here is what they had to say about The Trip:

“Received an email about this video by The Trip the other day, and even though it’s a year old, “On The First Time” is currently one of the finalists over at MTVU’s “Best Freshmen Video”. The reason I like this video is quite simple, it features some pretty impressive frisbee skills. And as an avid disc enthusiast myself, I can attest to the difficulty of these tricks. Even if you’ve never thrown a frisbee in your life you can still appreciate the beauty of throwing a plastic dish through the back windows of a moving car. And that’s not even the most impressive trick in the video. So check out the rest of em in this 80’s inspired video below and be sure to vote this one up over at MTVU to get this one into regular rotation. Also, for a sneak peak at the new self-titled album The Trip due out March 27th, head on over to OK!Good’s website.”

The Trip’s debut self-titled album will be released on April 10th, but you can listen to it streaming exclusively at okgoodrecords.com now! http://okgoodrecords.com/blog/2012/02/08/the-trip-the-trip/