Janet Devlin – Away with the Fairies

Janet Devlin releases her fourth single, “Away with the Fairies” ahead of forthcoming concept album Confessional

Dipped in mandolin, bodhran and cello, with a fluttery piano riff and lilting melody, the track – written by Janet about disconnected, out of body moments – strikes a comforting, familiar tone and returns the singersongwriter to the sounds of her Irish roots. The addition of a harp brings a mystical, ethereal feel to the song, “To me, nothing says fairies quite like the sound of the harp,” says Janet. From the age of six, Janet was fully immersed in the sounds of home, playing tin-whistle and fiddle in a local cèilidh band. “My collection of trad music CDs, tapes and vinyl of music from the likes of The Fureys and The Dubliners alongside listening to the radio with my grandmother are influences that I brought to this track and throughout the album.”

In this new single, the fourth admission from her collection of confessions, Janet explores the mind’s ability to disassociate with its surroundings – to be ‘away with the fairies’ – a personal reality that stemmed from her struggle to survive hidden addictions. The carefree nature of the track is at odds with the story at its heart; whimsical verses juxtaposed against a life that was anything but. She explains;

“I wrote this song about the rose-tinted glasses of youth, or more accurately – the beer goggles. I wanted the track to embody the happygo-lucky spirit of drinking in your teenage years. How you can purchase a cheap elixir from the local corner shop that’ll remove all social anxiety and inhibitions, and in those days, all seemingly without consequence.”

Produced by Jonathan Quarmby ( Lewis Capaldi, Tom Walker, Benjamin Clementine ) the track was written by Janet and multi-platinum songsmith Paul Statham (Dido; ‘Here With Me’ & ‘No Angel’, Kylie Minogue, Sophie Ellis – Bextor ). Having joined forces with Paul in 2017 when the concept of the album Confessional started taking shape, Janet felt compelled to confide in her cowriter about the hidden subject matter of her song. “Grant me wings…” begs permission for copious amounts of vodka and Red Bull to embrace an altered state; the charming phrase “moonbeam child” is the combination of moon from ‘moonshine’ and Beam from ‘Jim Beam’.

“I’d become no stranger to turning up to studios and gigs either drunk or hungover. Surprisingly it never affected my vocals. This was one of the reasons I got away with it for so long! Also, the pain of being hungover made for the creation of many sad songs and poems. I was good at hiding my problem until I could hide it no longer. My addiction to alcohol was ruining my life. I was physically, emotionally and financially drained. Recovery was my only option other than my inevitable early grave”.

Nearly a decade ago, Janet Devlin became the UK’s much-loved, elfin pop star. Today, fully grounded in her reality, she is no longer burdened by her past – watch her fly. 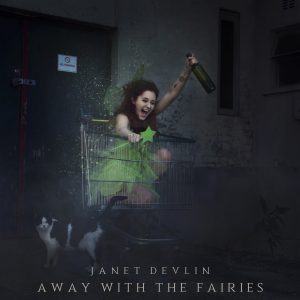